Everyone Can Play Music With Joué Play 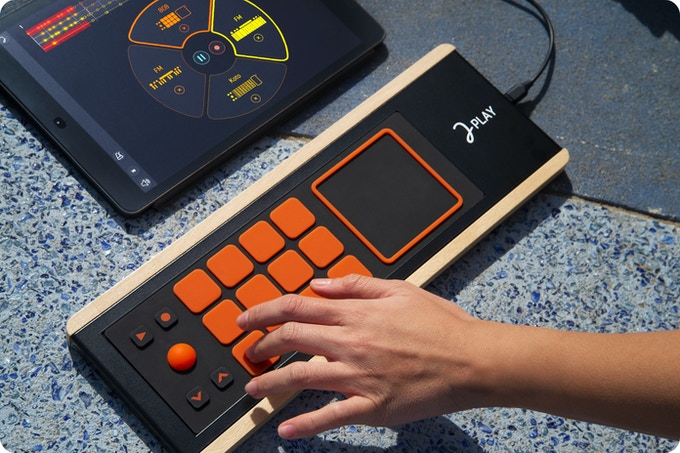 Thanks to the vast improvements to software synthesizers in recent years we've seen more and more people using them as viable alternatives to hardware synths. This has also meant that the MIDI controller market has flourished as brands compete to come up with hardware to complement these softsynths. Most brands have opted to stick with the tried and tested keyboard controllers, but we have also begun to see more risks being taken with unusual controllers. It looks like soon there will be one more to add to this list as Joué Play is currently on Kickstarter and already enjoying a very positive response.

At its heart, Joué Play is a very simple MIDI controller, but it also allows for much more customization than what we've seen before. It was designed so that anyone can use it, no matter their age or music skills. It consists of four Pads and a Board, which when used with the application allows you to create beats, play melodies, or play chords freely. The Joué Play is the brainchild of a team of passionate musicians who has a base camp in Bordeaux, France, but are scattered across the globe. They launched their first product on Kickstarter three years ago, but it was aimed at seasoned musicians. The complexity of their music software wasn't really well suited to amateur musicians, though, which is what inspired them to create a new instrument that is not just powerful and evolutive, but also really easy to use and fun.

The four Pads that are included have a selection of professional sound banks that cover everything from synthesizers and drum kits to traditional instruments, so you can coax all manner of musical styles out of them. Eight different instruments can be added per song and the app can then be used to add effects or mix everything. The neat thing about the Joué Board is just how sensitive it is. From vibrato and glissando to velocity, it is able to capture all the gestures used with traditional instruments allowing for a high level of musical expressiveness.

Joué Play allows users to change instruments on the fly by simply switching the Pads. Since the Pads are automatically recognized by the app in real-time they are instantly ready to play without the need to configure or program anything. The whole instrument is also portable and sturdy enough to take anywhere. The compact design allows it to be easily slipped into a backpack and the flexible silicon Pads are light as well as durable. You can even wash the Pads with water if they get dirty. Since you can use several Joué Play Boards with the app it makes for a great instrument to jam along with friends quickly and easily.

The beechwood used for the Joué Play Board body comes from sustainably managed forests and everything is designed, manufactured, and assembled in France. Joué has also made sure that the boards do not contain any batteries or perishable components. The app itself is also very straightforward and simple to use as everything is accessible from the main screen.

Joué Play development began in 2019 with the Kickstarter campaign currently active. There's still a few weeks left to go at the time of writing this article, but Joué has already smashed their goal of $75, 955. According to Joué, all their suppliers are functioning and able to produce the devices, so their supply chain won't be delayed by the Covid-19 crisis. Production will begin at the end of the Kickstarter campaign and Joué aims to deliver the Joué Play to backers before the end of 2020.

The simple nature of Joué Play means it's not going to be replacing any of your expensive synths or software, but could be a great option for anyone who simply wants to jam a few tunes. It could also be a great stepping stone for people who are interested in synths but are scared away by the technical complexities of the hardware and software involved. Check out the video below to see just how easy it is to get started with the Joué Play and head on over to the Kickstarter page for more information about the project. Reward pledges begin at E267 for a Joué Play Board along with Piano, Drum, Guitar, and Keys pads as well as the companion app. There are two different color schemes to pick from when it comes to the Pads namely Fire and Water. The difference is only aesthetic, though, as functionally the pads all remain the same.

Let us know on the forums or in the comments below what your thoughts are on Joué Play and whether it will get more people into synthesizers or if they would be better off with something that offers a little more complexity.