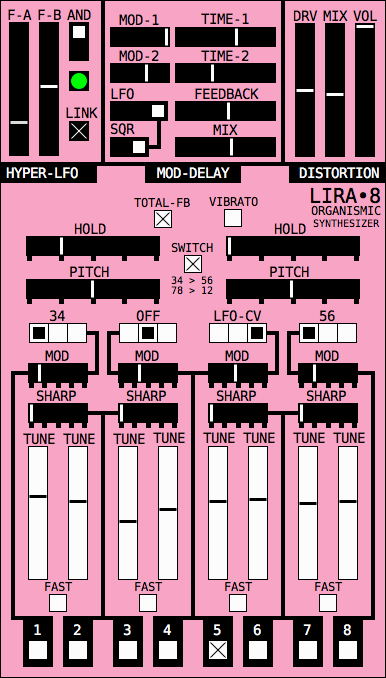 The SOMA Lyra-8 is a pretty nifty drone synthesizer that can be bought pre-built or as a DIY kit for those who want to assemble their own version. At just over 500 Euros it's not exactly cheap, and while the DIY kit is a little more affordable it only comes with the PCBs and ICs, not the body, knobs, screws, and other standard details. However, a developer named Mike Morena has made it a little easier for users to dabble with the sounds of the Lyra-8 by releasing an open-source software synth called Lira•8.

According to Moreno, the Lira•8 is a digital attempt at emulating SOMA Lab's Lyra-8 signal and flow, but is not affiliated and does not represent SOMA Laboratories. Like the original hardware, this digital version is optimal for drones, ambient landscapes, outer space sounds, and more.

Lira•8 is available in VST3, VST2, AUi, LV2, and Standalone (Pure Data) format for Windows, macOS, and Linux64 from the developers' website. In addition, the source code is available on Github. Let us know in the comments below what your thoughts are on Lira•8 and if you are a Lyra-8 owner, how close is it in terms of sound.