Companies have always gone to great lengths to market their products, which often resulted in adverts that were completely over the top. This was particularly noticeable with print adverts for synthesizers back in the day. While it is easy to demonstrate how a synth sounds and why you would want to own one by using a video advert, it is a bit more tricky to convey the message in print. However, this didn't stop a lot of companies from trying, often with comical results. Here are just a couple of examples of print adverts from back when vintage synthesizers were still state of the art technology.

The Roland SH101 Takes You Where You Want To Go

When Roland released their SH101 they wanted to demonstrate just how lightweight their synthesizer is as well as emphasize the fact that it is battery powered. Clearly the best way to accomplish this was to show people playing the SH101 while they are on the move. They even managed to highlight the different color options for the synth in a very "subtle" manner' So, if you have ever had the urge to play a synthesizer while riding a skateboard, or skiing, or sitting on the back of a scooter, then clearly the Roland SH101 should be your top pick. Unfortunately, anyone who tried the activities depicted in this ad probably found that the only place it took them was a hospital emergency room!

The Force Is Strong With The Moog Source 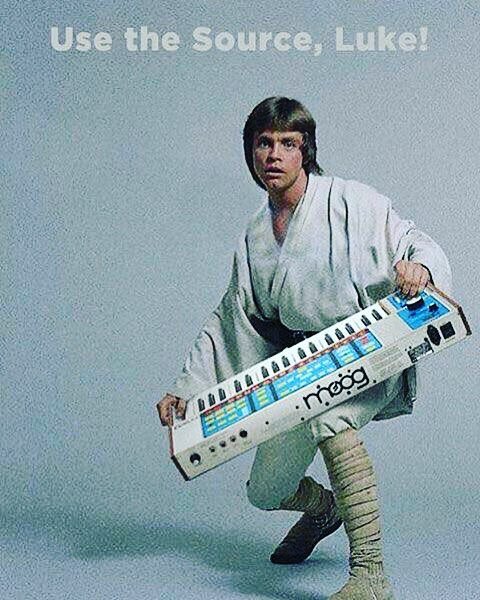 After mastering the force, it looks like Luke Skywalker turned his attention to the Moog Source. Moog Synthesizers shared this image on their Twitter feed for May the 4th back in 2017 and when fans asked if it is an actual ad they replied "Yes, in a galaxy far far away." Personally, we would have gone with the synth lord himself, Darth Vader, but we are quite impressed by how Luke has managed to bring balance to the Source using his knee. 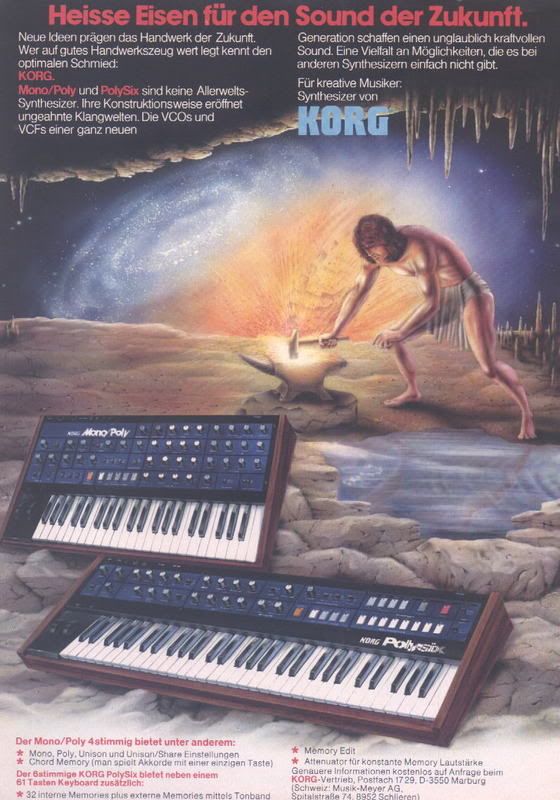 Synth manufacturers were very fond of embracing the "futuristic" nature of their products in adverts, but this German one by Korg for their Mono Poly and PolySix synths is a little strange to say the least. We are not sure why they chose the image of someone hammering away at an anvil to represent the "sound of the future" but at least it takes place somewhere in a cave overlooking the galaxy. We also doubt that any blacksmiths were involved with the creation of the mono poly, but it does make for a striking image. Considering the way in which some inexperienced players bash away at their synths, perhaps this image does make sense after all!

The Fairlight CMI Is Out Of This World 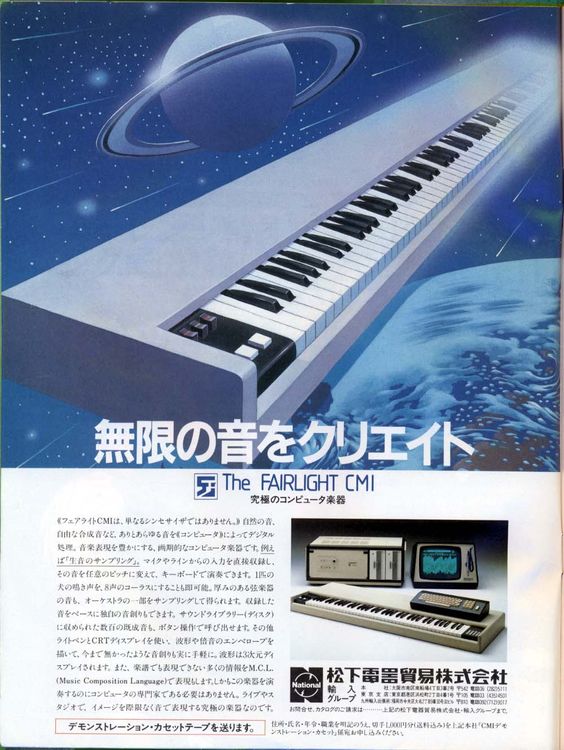 Here we have another example of a synthesizer in its natural habitat, which is floating around in space. Judging by this image, it can be found somewhere between the Earth and Saturn, but we have a feeling that the objects depicted here are not drawn to scale. The advert does a marvelous job highlighting the length of this synth, though, as the artists attempted to include all 73 non-weighted, velocity sensitive keys. 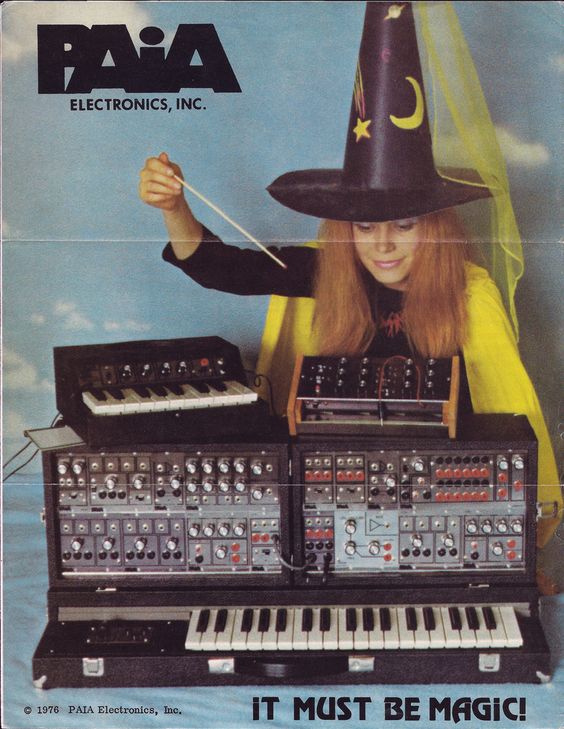 Synthesizers are complicated and explaining to your potential customers exactly how they function and what they can do isn't easy. Clearly PAiA Electronics decided to take the easy way out with this advert by simply attributing their creations to black magic. Considering how finicky some of these early instruments were, it wouldn't surprise us if some of their customers really believed that their gear was cursed. Unfortunately, the yellow cape trend never caught on amongst witches either.

The Prophet 10 Is The Ultimate Keyboard For Flying High 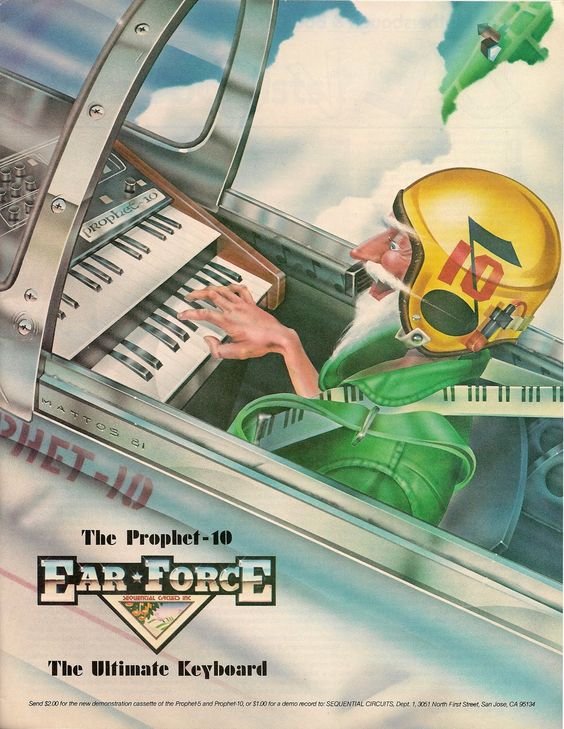 This Prophet-10 advert doesn't tell you a whole lot about the hardware, but it does feature a wizened synth player using it to control his aircraft. Luckily for him, the Prophet 10 featured in the advert is the "version 2" of the hardware as the overheating issues of "version 1" would have made it a poor choice for that tiny cockpit.  He also features in other adverts, such as the one where the Prophet 5 is used as the wings for his propeller driven plane. The fine print of these adverts makes it clear that if you want to actually hear what the synths sounds like, you are going to need to mail them some money first.

The Casio VL-Tone Is Also An Amazing Calculator 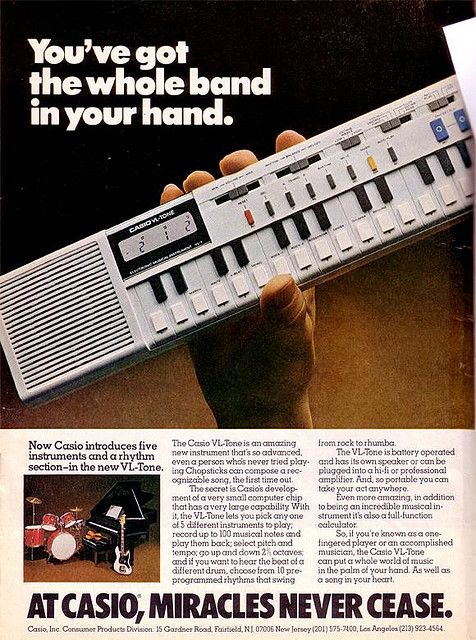 The Casio VL-Tone advert is pretty straightforward as it demonstrates the size of the instrument and gives a full rundown of all its impressive features. They even mention the secret of all its incredible features, which is a "very small computer chip." However, if this advert is to be believed, one of the most amazing features of this instrument is that it can be used as a full-functioning calculator!

The Casio SK1 Digital Sampler Is Compatible With Horses 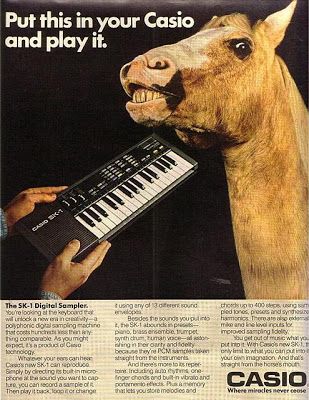 The advert for the Casio SK-1 Digital Sampler boasts that whatever your ears can hear, the instrument is able to reproduce. However, we are not quite sure why they thought that the best way to demonstrate this is by shoving the keyboard in the face of a very startled looking horse. It is also not clear whether the "straight from the horse's mouth" line in the advert was added because of the horse or if the whole advert was created simply to include this one line.

These are just a small selection of the many strange and amusing synthesizer adverts that were created. Tell us on the forum or in the comments below about the weirdest ones that you have ever seen and if any of them actually managed to entice you into buying the product.