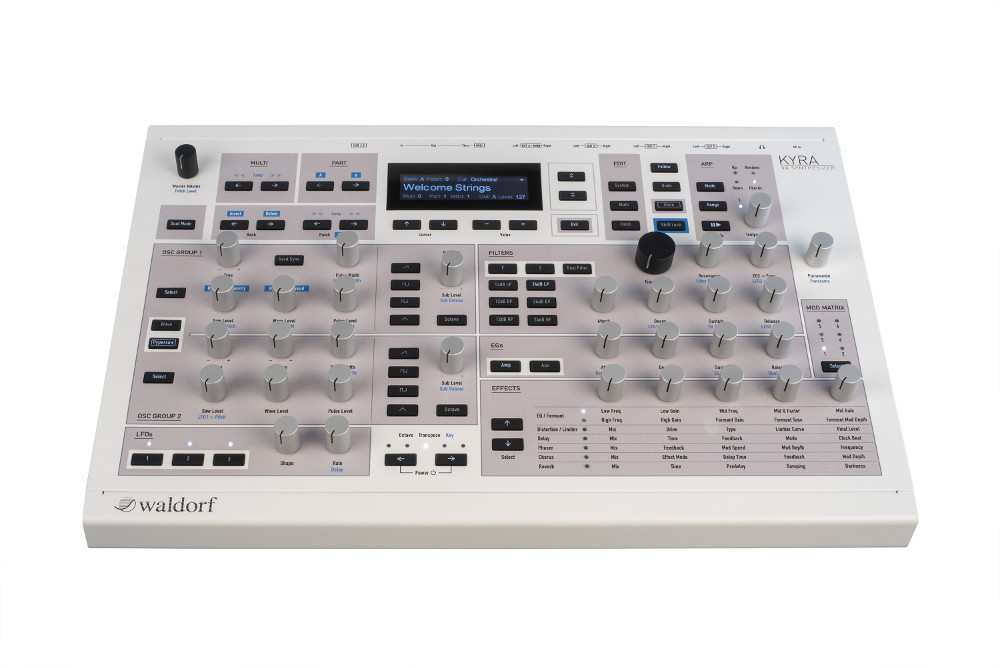 Calling something "one of the most powerful music synthesizers ever built" is undoubtedly a bold claim, but it demonstrates the faith that Waldorf has in Kyra. Those who attended NAMM earlier this year could see a pre-production prototype of the Kyra virtual analog synthesizer, but Waldorf has now announced its availability.

In short, Kyra is a hardware VA analog synthesizer that, according to Waldorf, will be able to create a wide range of contemporary sounds for live and studio musicians. It features an elegant desktop design that simply oozes class, but it's what's under the hood that really counts. Here Waldorf delivers with eight independent "parts," each of which functions almost like a synth on its own. This is because all of them can draw on two groups of oscillators as well as two sub oscillators along with filters, a multi-effects unit, and envelope generators, to name just a few. The result is a genuinely multitimbral instrument capable of delivering 32 notes per Part, with each Part capable of being sent as 24-bit audio at 96kHz to your DAW.

When it comes to patches, each Part of Kyra hosts a patch from the pool available to the system. There is a total of 3,328 patches available, with 26 banks containing 128 patches each. The first even banks are reserved for "user" patches that are stored in RAM, while the remaining 19 banks are ROM patches, Kyra also allows users to copy whole banks between RAM and ROM, which means everything is user-programmable.

Other notable features of Kyra includes its two primary virtual alias-free oscillator groups per voice, and the ability to switch from Wave mode to Hypersaw mode. The former makes use of a virtual analog synthesis model for the easy construction of sounds using intuitive subtractive synthesis, while the latter makes use of a special algorithm comprising six real oscillators. In addition, Kyra has three fast-response ADSR envelope generators with EG Slope setting, an arpeggiator on each Part with 128 preset patterns as well as a high-resolution 256x64 pixel graphic OLED display.

Here is a full list of specifications for Kyra:

All sound features can be used simultaneously

Oscillators are in two groups for better overview

All osc per voice are available simultaneously

Double Mode: layers the same sound two times and detunes them against each other

Kyra can be used as an audio interface

On paper, it all sounds very impressive, and the metal case design with its wood sides makes for a sleek looking piece of gear. However, getting your hands on Kyra is not exactly cheap as its suggested price is just over $2,000. Check out the official website at https://www.waldorfmusic.com/en/kyra and let us know in the comments if you plan on getting your hands on this synth or not.