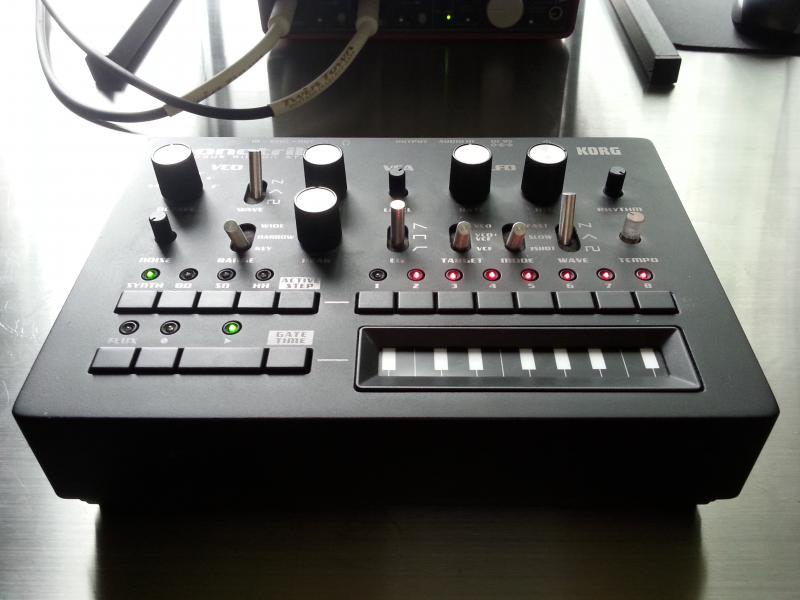 The Korg Monotribe, released in 2011, was the evolution of the pocket-sized Monotron into a more controlled, musical analog groove-box that would ultimately set the stage for Korg's modern reissue of the MS-20, as well as the much-anticipated Volca series. It is, in essence, a Monotron and an analog drum machine in one box. On paper it sounds deceptively simple, but there is a bit more to it than that.

Let's start with build quality, and then move on into more sound-related topics. The case is metal, which is a pleasant departure from the Monotron's Happy Meal plastic case. The knobs are, while a bit on the wobbly side, bigger and easier to grasp than the tiny ones found on the Monotron. The quarter-inch audio out is nice as well, and gives one the feeling that they are indeed playing a real musical instrument. It does not feel like a toy. The speaker on the underbelly of the unit is small, and not very loud, but it works in a pinch, and if it's not enough, use an amp. That's what the audio out is for.

Korg have taken the simple VCO architecture found in the Monotron and expanded it; now offering sawtooth, triangle, and square waveforms, as well as rock-solid pitch stability (it is actually not possible to detune the oscillator) and an octave switch that offers a range from 64' all the way up to 2'. Alongside the VCO, Korg have also outfitted the Monotribe with a white noise generator, useful for crafting custom percussion tones or just adding a bit (or a lot) of grit to your sound. Also present is a more sophisticated (though rudimentary) amplitude envelope generator than the simple gate on/off found on the Monotron. As the player, you have three separate EG shapes to switch between: ramp down (lending itself to more percussive, plucked, or piano-esque tones), gate on/off, and ramp up (attack at about 50% and sustain at 100%). Having three envelope types to choose from certainly is a limitation, especially for those accustomed to the standard ADSR found on other analog synthesizers.

The minuscule pitch ribbon controller found on the Monotron has been carried over to the Monotribe, much to the chagrin of keyboard players everywhere. This, however, could be seen as a limitation that forces one into a playing style unique to these instruments. Something Korg have done to remedy this obstacle, however, was to include the "range" parameter switch. We have the option to choose between three functions: "wide" sets the ribbon to cover a broad range of frequency, from borderline-LFO range frequencies at the bottom to high-pitched screeches at the top. "Narrow" sets the ribbon to an accurate scaling of the printed keyboard, while still allowing you to glide smoothly between notes. Finally, setting the switch to "key" quantizes the ribbon to match the printed keyboard, giving you pitch-perfect stability, and turning the smooth legato of the "narrow" setting into a glissando reminiscent of Dubreq's Stylophone.

The LFO is technically rudimentary but is, in practice, wildly versatile. Three waveforms (saw, triangle, and square) can be routed to modulate the frequency of either the VCO or VCF, or both simultaneously. You are able to toggle LFO frequency ranges between fast, slow, and 1 shot, which acts as a second (still quite basic) envelope generator. The LFO, when set to "fast", is capable of venturing far into the audible frequency range, so much so that by playing a bit with the "rate" and "intensity" knob settings, one can coax almost formant filter like tones out of the Monotribe, as well as some sounds that emulate things like oscillator hard-sync or ring modulation. I personally created my own sample library of drum sounds which I obtained exclusively from the Monotribe, and was amazed at the tonal variation I was able to achieve simply by playing with the LFO rate knob while set to "fast".

The filter design is the same as the one found in the Monotrons, and of course, the MS-20. It is 24db/octave, which provides us with a very steep cutoff slope, good for aggressive sweeps and introducing weird harmonic content with the utilization of filter resonance, or "peak" as it is referred to on the front panel.
The sequencer is simple. Very simple, in fact almost Zen-like in practice. This is a good thing, so long as you aren't expecting something comparable to what Elektron are known for. With no MIDI, it is important to have easy access to creating a musical sequence without having to adjust a potentiometer and wait for your sequence to cycle round for the twelfth time to ensure that you've tweaked the pitch to a note that fits in with the others in the sequence. This SH-101 style of sequencing is becoming more and more popular with today's current batch of analog monosynths, and it is very much welcome.

Korg's Monotribe is, along with being an analog monophonic synthesizer, an analog drum machine as well. This section is mind-numbingly simple, so let's dive right in. We have a kick, a snare, and a hat. That's it. 8 steps for each drum, and programming is easy. If you want to lay down a basic 4/4 kick, click the button labeled "BD" (Bass Drum), and select steps 1, 3, 5, and 7. Want it in half-time? Disable steps 3 and 7. Want a steady hat roll? Select the button labeled "HH" (Hi-Hat), and light up steps 1-8. It's easy, no-frills, no cusomization, dry-toast access to analog drums. Now bring in your synth sequence by cranking the VCA volume, and you've got a classic Berlin-school electro track! Congratulations, you're a musician!

I want to take a moment here to say that, while I do realize that the Monotribe is a very basic, introductory-to-synthesis type thing that synth freaks buy for their kids or girlfriends, it has a distinguished personality and injects an intense flavor to every track I use it on. The oscillator is bright, raspy, and buzzy. The filter growls, gurgles, and howls; and the sequencer is a blast to play with. I believe Korg may have created the Monotrons/Monotribe solely for the purpose of guaging interest in analog synthesizers, but they are in their own right very useful and musical in nature. Korg have outdone themselves in the department of providing incredibly useful and unconventional sound possibilities in an affordable package, and I applaud them for that. Let's hear it for a mega-corporation who have not lost interest in making music fun above all else.

2 new monotribe tracks, monotribe through monotron without effects/mastering. listen to it in the vid above. | Read more...

... amplifier designed to increase the output level of the individual out patch points on the monotribe (which is PAINFULLY low). It pretty much raises the outputs to line level. This kit ... | Read more...

... I cannot change any of the firmware functionality http://blog.gg8.se/wordpress/2011/08/14/monotribe-midi-and-me/#What_can_you_do_with_MIDI_on_the_monotribe Simple answer: You can sync ... | Read more... 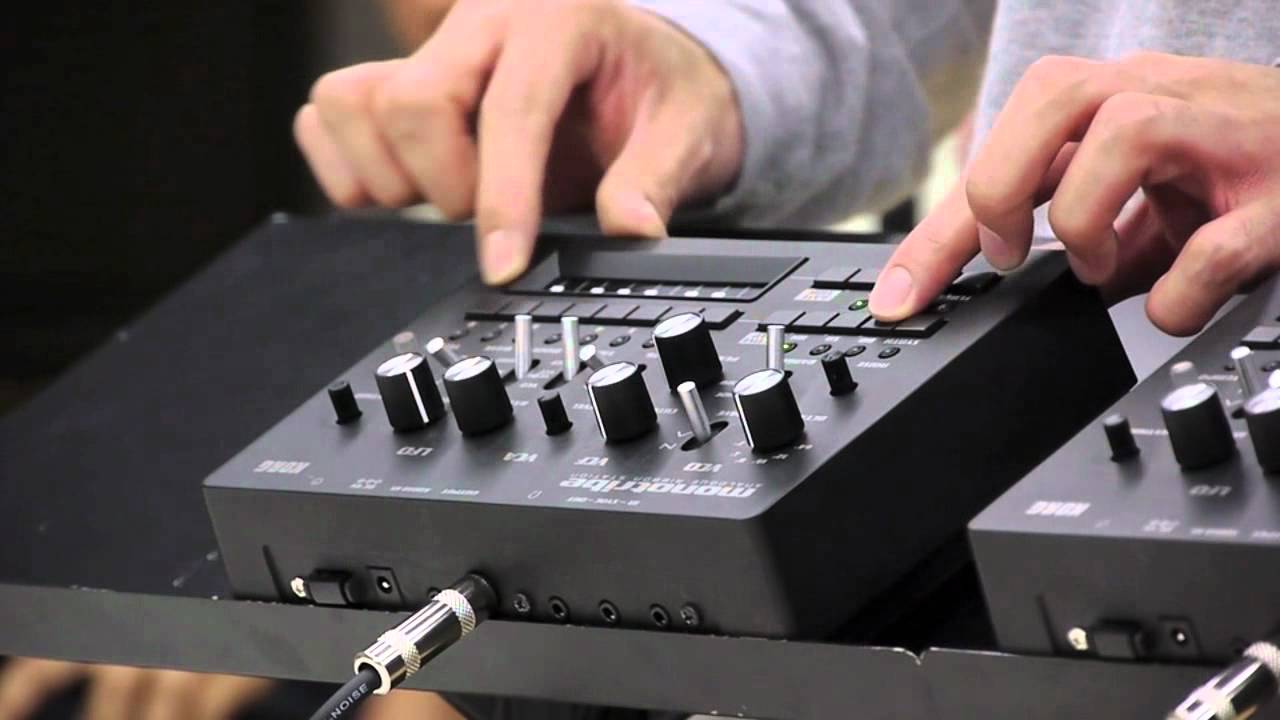