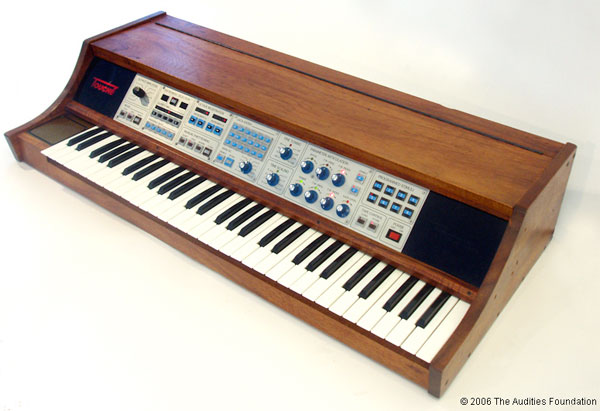 The Buchla Touché was a massive synth for its time (circa 1978) with a great sound. The Touché was a hybrid, using analog circuitry in combination with a digital computer to handle the processes of programming. It had eight voices of polyphony with a thick 3-oscillators per voice for a total of 24 oscillators! It had a normal 61-note keyboard with split/layering capabilities unlike the quirky touch-plate keys found on other Buchla synths. This was a Buchla designed for performing musicians.

The computer used to program the Touché utilized a proprietary computer language called FOIL (Far Out Instrument Language). Data entry into the Touché was done via the front panel, but an external monitor must be connected to see what you are doing. The 24 oscillators of the Touché are also digital for a very stable and wide range of sonic possibilities. There were 32 Patches instantly available, and any two could be simultaneously played. Additional patches could be stored to a cassette tape. There was also a 3-way touch-sensitive controller for pitch bending, modulation, etc. It had very unique programming abilities as well as the ability to record your riffs or patterns, and play them back in a variety of ways in real-time. Unfortunately they are super rare (only four were made).