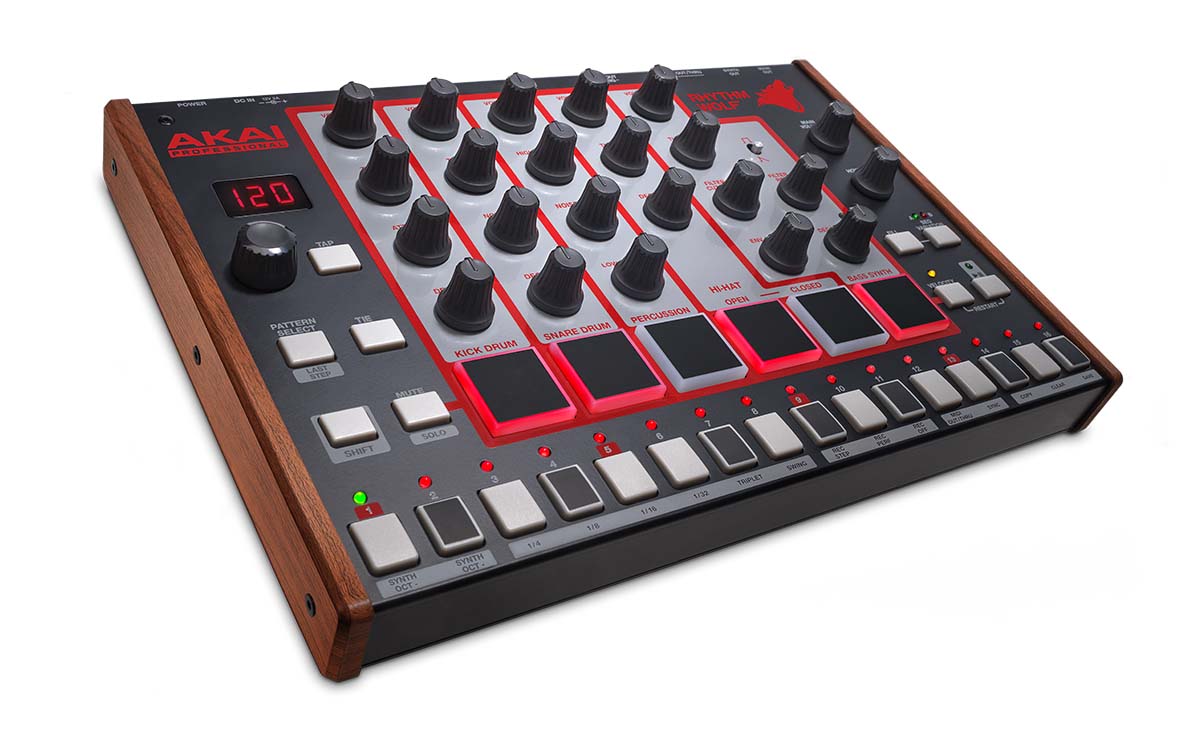 Possibly the single most hated Drum Machine/Synthesizer ever produced, the Akai Rhythm Wolf is a fully analog 4 voice drum machine, 1 voice bass synthesizer that polarizes the synth community to this day.

Amidst the euphoria of the "New Analog Revolution" of the 2010's, where analog electronic instruments had not only come screaming back with a vengeance, but they howled at a price anyone could afford, Akai unleashed a product that seemingly hummed the anthem of "instant classic". Its' specs read like something any self-respecting synth-geek should be hiding under the mattress, lest their mother find it.

Full VCO, analog four voice drum machine, with one voice, variable Saw/Square, resonant VCF packing, envelope shaper equipped bass synth. It seemed to be an 808 and 303 all in one box for the lowest price one could be charged and still take it seriously. Was this going to be the "genre creating", "Mojo Box" for the new generation of electronic musicians?

In what ended up being as much a biopsy of "internet culture" as a review of a musical instrument, the question was answered with a resounding "NO!" when a Youtube reviewer's rant went viral. In this video, a disgruntled and disheveled youth spouted venom at Akai's new product as if it had done him some deep personal wrong. It turned out one video wasn't enough, soon part two appeared, providing a seething, bookend to his first damning installment. In the day or two that had passed, his mood hadn't improved.

Unfortunately for Akai, the videos were entertaining to a large segment of the instrument-buying population, and it seemed no one could watch the video without adopting the opinion of the reviewer. The Rhythm Wolf was D.O.A, it's competitive price insured some sales, but these led to copycat videos and before long it was accepted as fact that the Rhythm Wolf was a dud, whether anyone had actually tried it for themselves or not. Did it deserve this bad reputation? Or was it the first electronic musical instrument to fall victim to the "online bullying" phenomenon?

First, let's examine the specs and what is universally agreed upon concerning the Rhythm Wolf, be it good or ill.

As advertised, it is a four-drum voice, one synth voice, VCO analog, electronic groovebox/sequencer. Examining it straight out of the box, its superior build quality is unquestioned, even by its critics. It is a solid and weighty unit that has certainly been built to last, and though close examination reveals "fake" real-wood-sides (plastic made to look like wood) the sturdiness of the instrument itself has never been questioned and is a pleasant surprise in this price range.

Moving left to right, each individual voice has a column of four parameter dials that range down to an MPC type velocity sensitive pad assigned to that voice only. It should also be noted that only 3 stages of velocity: Hard, Medium, Soft, are available -- there are no shades of grey in between. So a tap with a "CC" velocity value of 30-90 will all sound soft, 91-110 medium and 111-127 hard. All "CC" values in between the threshold numbers will sound at the same velocity.

Each voice's dials offer parameters unique to that voice. They are as follows:

Kick Drum: Volume, Tune, Attack, Decay,
Snare Drum: Volume, Tune, Noise, Decay
Percussion: Volume, High tune, Noise, Low tune
High Hat (Note that the High Hat is given two pads, one for open one for closed. The only real difference being that the decay is delayed on the "Open hat" pad)
Volume, Tune, Decay
Bass Synthesizer: Volume, Tune, Filter Cut off, Envelope amount, Filter Resonance, Decay. (There is also a switch that allows the user to choose between a Saw and a Square wave)

Finally, at the far right there are two "Global control" knobs:
Volume, Howl (Howl is Akai-speak for Overdrive, turning this knob overdrives the entire unit and effects all voices)

The disappointments begin early as the kick drum is a flaccid and, indeed, a barely audible affair that sends one reaching for the attack knob first thing. The dismal news continues as one realizes that whether it's tune or attack (volume and decay function normally) these parameter knobs barely effect the sound at all, this is a problem found throughout the device, but is felt the hardest here. The kick lacks a snappy transient and there is nothing the user can do about it. New users no doubt, having begun their exploration of the Wolf with visions of analog 808 and 909 kicks in their minds are bitterly disappointed, and justifiably so. It feels that no matter what you do, the kick is never present enough, how Akai let the Wolf out to pasture with such weak toothed kick is beyond comprehension.

Things pick up considerably in the neighboring snare voice. Though the tune knob is barely good for a few semi-tones, the oscillator produces an excellent "Thud" at 200 Hz and the white noise generator produces a piercing but never annoying whiplash of sizzle at both long and short decay levels.

Next is the appealing but odd "Percussion" voice, as it seems to be nothing more than a DIFFERENT approach to snare, the high and low tune knobs dial two separate pitches to the user's desired interval, while the noise and decay knobs provide the same white noise burst and dispersion as the neighbouring snare voice did.

The Hats are a split decision. Once again the tune knob seems only good for a slight shift in tone, the decay comes as advertised. Between the two pads for open and closed respectively, the hats do not disappoint or thrill.

Lastly, we come to the Synth voice and perhaps the most damning piece of evidence against the Rhythm Wolf. The Bass synth's pitch tracking is improperly set, thus the "Hard" sequencer/ Shift function buttons below the pads, which serve triple duty as "piano" keys play their assigned pitches audibly out of tune, rendering the bass synth useless. Another method of playing pitches, namely playing the bass synth's singular pad and twisting the tempo dial for pitch change proves no more effective.

Let it be known, that, within a few months, Akai released a "Tuning App" for the Wolf's synth. It does a passable job and gets the pitch tracking right for a period of time, but it must be run multiple times, and the synth will start to drift back out if it isn't used every 25 minutes or so. Also, with the lightning pace of computer OS changes and Akai's abandoning of this product, a day will come soon when modern computers can no longer run the "Tuning App." When that day comes, either a benevolent programmer will create a third party app for it, or the Wolf's synth voice will be forever useless.

The synth voice itself is pleasingly rich in either Saw or Square form, though, disappointingly, the filter resonance cannot be turned all the way up because the last 20% will dive-bomb the voice's volume out of Audible range.  The envelope amount knob is more of an envelope delay control, that adjusts when the envelope's attack occurs, cut-off and decay function as expected.

Moving to the global knobs, one is glad to find volume does as it promises, the Howl (overdrive) knob, however, is a curious affair. Firstly, it is as noisy as the day is long, but it is also only effective for the first 40% after that, no amount of discernible change can be detected.

The sequencer is a simple but well-endowed affair. The drums transmit on MIDI Channel 10, with fixed note numbers, so no changing them to fit in better with other gear. The synth transmits hard on channel 1 and includes a "note-tie" feature, that keeps the envelope open while consecutive notes play.

There are 16 banks with 16 step "A" and "B" Patterns each pattern also includes a "fill" which can be triggered by hand to substitute for the entire pattern, one for each. Thus making each of the 16 banks essentially 64 step-patterns, triplets and variable swing are all available, as are grid resolutions (in either regular notes or triplets) from 1/4 to 1/32. The sequencer is no disappointment.

In conclusion the Rhythm Wolf has some egregious flaws, but it also has a scruffy charm that some will find irresistible, after playing with one is easy to see the proper comparison would have been a CR78 or other 70's groove box, not an 808 or 909, it is primitive, it is flawed, but it is also a unique and curious piece of gear, something we may not see enough of these days. If you want some dirt old-school analog splat and aren't afraid of the wild tuning irregularities and vanishing kick drum, then perhaps you have what it takes to tame the Akai Rhythm Wolf. 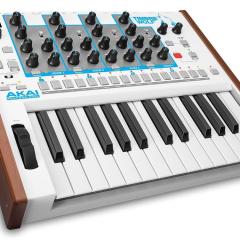 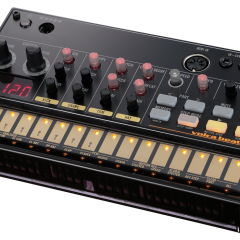 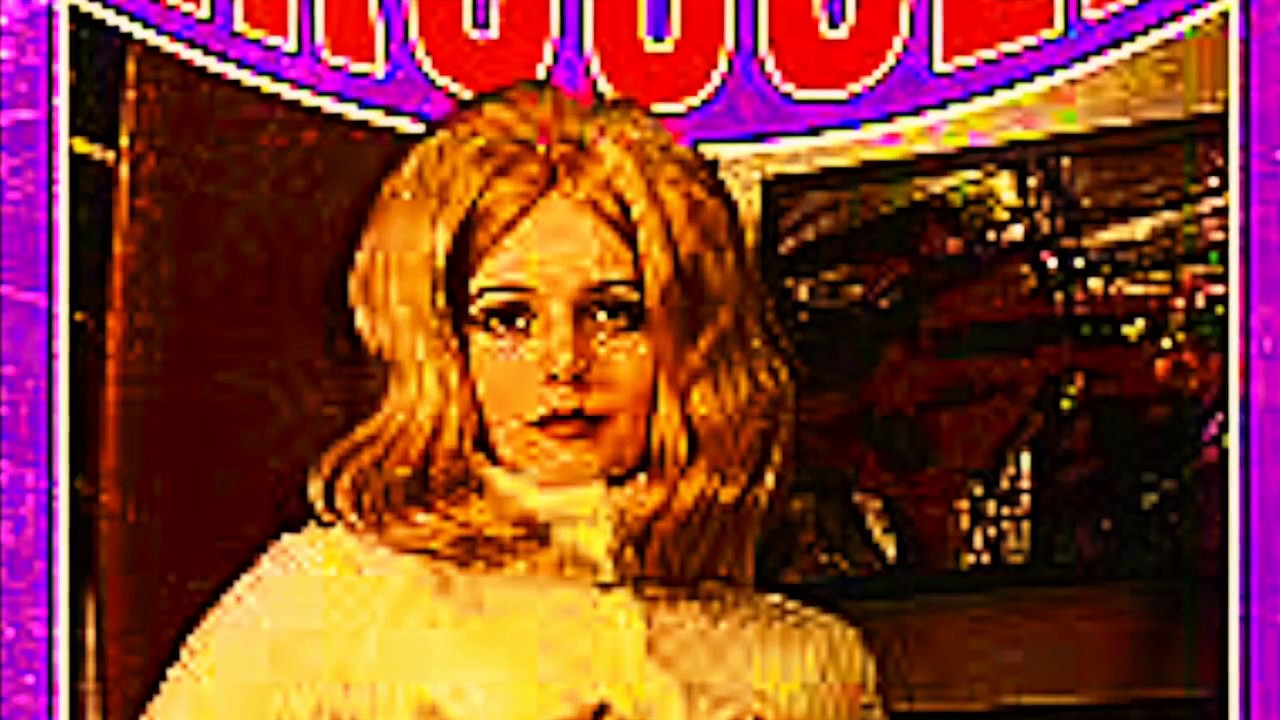 Polyphony - 5 voice polyphony, four drum voices, one synth
Oscillators - 5 V.C.O's (4 drums, one bass synth)
Waveforms - Saw or Square
VCF - one -12db resonant low-pass filter, for the synth voice
LFO - no LFO
VCA - Minor envelope adjustments can be made via the panel knobs, each voice has it's own envelope with varying levels of control.
Control - MIDI: In/ Out / Through, Analog trigger I/O (Roland 24 ppq, thus Korg 48 ppq gear will operate at half speed)
Sequencer - 4 voice polyphonic sequencer on MIDI channel 10, Monophonic sequencer on channel 1
Patterns - 16 x 64 steps (Non chain-able)
Effects - Overdrive (Howl)
Keyboard - 12 hard sequencer buttons double as "Piano keys" each voice has dedicated MPC-style pad with 3 levels of velocity
Memory - 16 x 64 all memory can be saved and is retained after power off