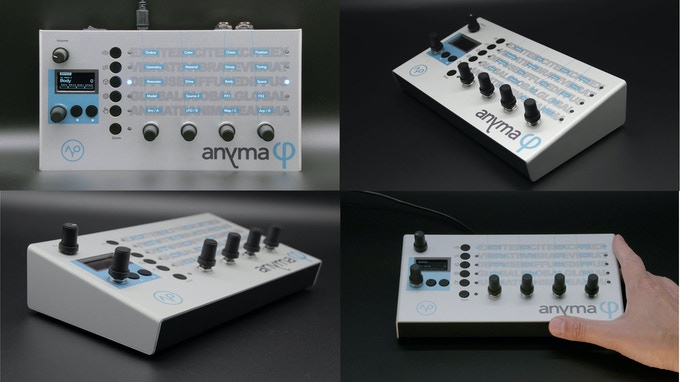 Early in December Aodyo Instruments launched a Kickstarter campaign for their affordable hybrid monophonic synthesizer, the Anyma Phi. According to Aodyo, it will allow users to create "new sound universes" that are inspired by the real world, where objects collide, vibrate, and resonate. The idea was to basically blend all the classic ingredients of electronic music together with physical modeling technology, which would allow the synth to simulate acoustic sound sources. These include things such as strings or reeds as well as wood, glass, metal, and other resonating structures.

The project launched with a $42,450 goal, which was smashed within three days. With so much time left for the Kickstarter, there is a good chance that more of the stretch goals will also be unlocked. At the time of writing the percussive playing surface stretch goal has been reached, which Aodyo says will allow users to tap and scratch their sounds directly on the case for more fun and expressive performances. To accomplish this feat, a piezoelectric contact microphone will be integrated into the case with the resulting sound being available to the Anyma as an audio input. Further stretch goals include a patch librarian/editor, extended memory, micro tuning support, additional modules, and Bluetooth MIDI.

Aodyo Instruments consists of a small team from the north of France whose previous work includes the Sylphyo, an electronic wind instrument inspired by acoustic woodwinds. They have stated that Anyma Phi is compact enough to stand on your keyboard and will be compatible with any MIDI controller, including Sylphyo. In addition, it could be used as a stand-alone effects processor or as part of a guitar effects pedal setup. While the technical specifications of Anyma Phi could still change it features a powerful digital semi-modular synthesizer engine with 63 patches, 3 oscillator slots, five effect slots, two audio buses, and eight modular slots. The Latter include DAHDSR envelope generators, LFOs, curves, interpolators, slew limiters, and more. Anyma Phi also features 24 mapping slots with each offering control of any synth parameter using a modulator or a controller input.

Check out the quick sound design demo of Anyma Phi below and head over to the Kickstarter page if you want to back this project or want to learn more about the synth. The Kickstarter page also features a selection of sound demos of the synth in action. The final software development and production phase is expected to take place early next year with delivery to backers estimated for the end of March 2021. Early adopters can expect to pay about $424 for Anyma Phi, which is 30% off the regular price, but this offer is limited to 100 backers. Backers who pledge about $968 will receive an Anyma Phi and can participate in a special online masterclass to learn more about the secrets of this synth. Be sure to let us know in the comments below or on the forum whether or not you are excited about Anyma Phi and if you will be backing the Kickster or not.