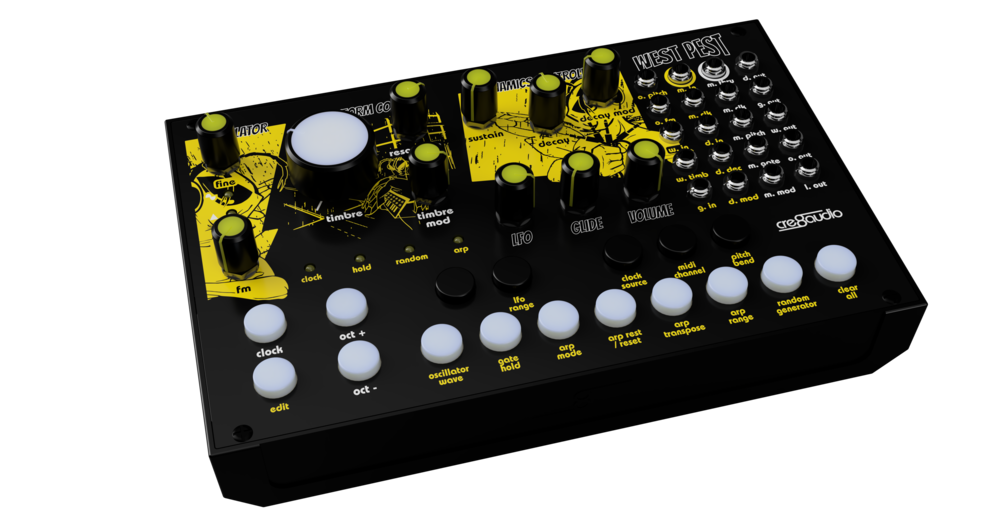 Hot on the heels of their East Beast desktop synthesizer, Crea8audio recently announced a new West Coast style semi-modular synthesizer called West Pest. They describe it as the "too hip for school cousin" of the East Best that features a "pesty cornucopia of simple complexity."

Synth fans will know that the West Coast style usually means additive derived, rich and complex sounds that are often coupled with abstract and experimental user interface elements. West Pest does offer a wide array of sonic capabilities, but instead of a deep dive into the abstract, it maintains a quick and easy workflow. All of this is packed into a modest bento box-sized exterior that can be removed by those who want to transform it into a 40HP eurorack module.

West Pest was designed in partnership with Pittsburgh Modular Synthesizers and features an oscillator that is not a clone of anything else on the market. It is also made with 100% modern components, allowing it to provide super-rich and unique sounds while remaining very stable. West Pest also utilizes a custom wave folder to shape the sound. This allows for some additional dimensions to be added to the oscillator core, which already sounds unique on its own. However, the wave folder of West Pest not only does what traditional wave folding circuits have done for years but also allows users to fold previously unfoldable waveforms. Users can even input external sound sources.

West Pest stays true to the West Coast synth vibe with a dynamics controller and an LFO for sound sculpting. The Dynamics Controller, in particular, is interesting as Pittsburgh Modular Synthesizers designed it to combine the functionality of an envelope generator, VCA, and a low pass filter. This results in the entirely unique round and musical textures. Like East Beast, West Pest works without patch cables but has 18 Eurorack compatible patch points for users that want to plug it into itself or other gear. These can be used to rewire West Pest's signal flor or share some of its elements with other compatible synths and vice versa. Of course, it also has MIDI IN and MIDI Through for connection options, along with performance features such as a built-in tap tempo clock, arpeggiator, and sequencer.

For more information or to view the full technical specifications, visit the official website at https://www.cre8audio.com/westpest. West Pest can be pre-ordered now, and according to Cre8audio, shipping is imminent. The MSRP for West Pest is $349.99 with an estimated street price of $249.99.