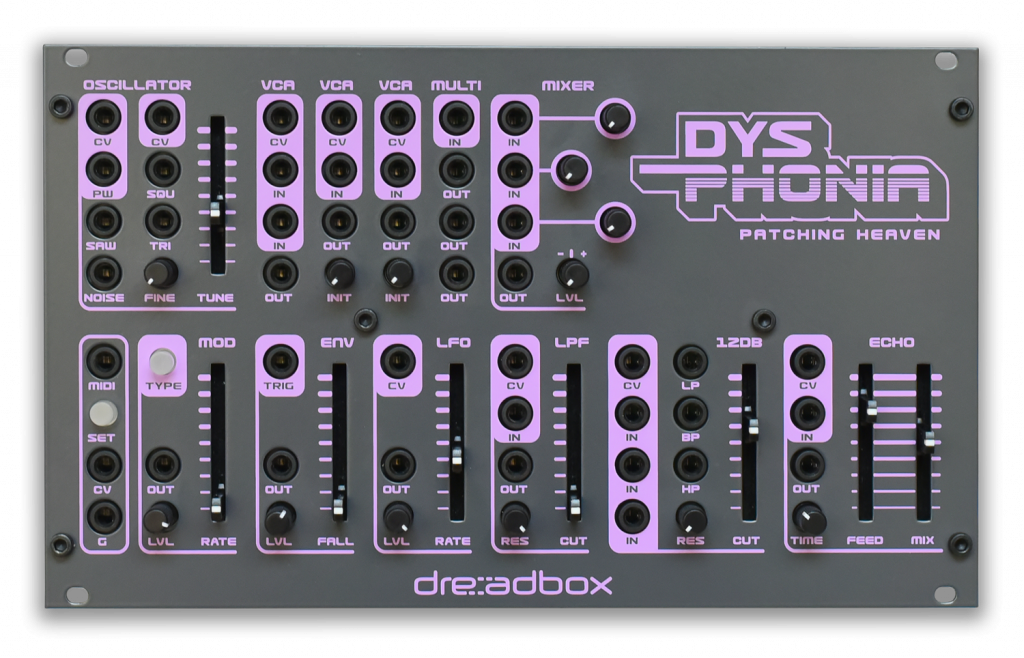 Dreadbox, known for the DIY synth kits such as Hades, Erebus, and Antiphone, recently announced a new addition called Dysphonia. Like the rest of their DIY kits, it is a one-time project that will not be re-released after it is sold out. All the components to create the project are included, and it is available from the Dreadbox website at 185 € (ex. VAT).

According to Dreadbox, Dysphonia is ideal for inexperienced DIYers and can be used as a desktop or a Eurorack synthesizer. It is a full voice modular synthesizer with open architecture and consists of 13 individual sections. This powerful sound designing machine also comes with a dedicated USB to Eurorack power converter.

Dysphonia features an analog oscillator with four waves, three analog VCAs, a passive signal multiplier, CV and audio 3-to-1 mixer, and a high precision MIDI to CV/Gate converter. In addition, it has a 1ms/stage snappy AD envelope, wide-range analog LFO, a 24dB 4-pole analog self-oscillating low pass filter, and a 12dB 2-pole analog multi filter. Dysphonia even has the same hybrid echo as found on the Erebus synthesizer.

According to Dreadbox, Dysphonia features a sophisticated digital modular with four different modes. These include an LFO with a wide range, four waveforms, and delay function. It also has a Random mode with classic sample & hold or key triggered with lag filter. Furthermore, the Envelope mode offers a snappy 1ms/stage, Attack -Decay or Attack - Release, and finally, the CC mode features modulation wheel, velocity, aftertouch, unipolar or bipolar.

Check out the official Dreadbox website (https://www.dreadbox-fx.com/dysphonia-diy-kit/) for more information about Dysphonia or to download the operation and construction manual.