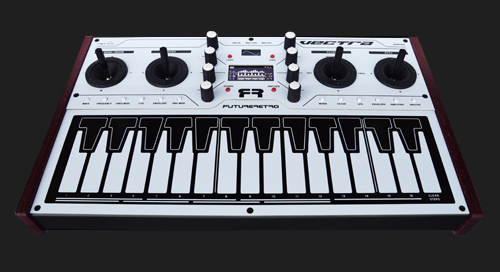 After teasing the Vectra earlier this year, Future Retro has opened up pre-orders for their hybrid synthesizer. After a lot of speculation about what it would offer, the full details reveal quite an interesting synth.

Future Retro designed the synthesis architecture of the Vectra so that it is flexible enough to recreate multiple synthesis techniques of the past while also introducing some new innovations. Digital oscillators provide the highest degree of tuning stability, while the four-channel mixture offers an even balance when mixing multiple sources. More than 500 waveforms are on offer thanks to the five LFO's, which Future Retro has stated can be used as LFO's, complex envelopes, or audio rate oscillators. The six morphing envelopes are also noteworthy, as is the analog multimode filter, which provides six primary filter types.

The Vectra has a 29-note capacitive touch keyboard, which might sound limited, but according to Future Retro, applying scales to the keybed opens up access to four octaves of major scale notes and six octaves of pentatonic scale notes. An integrated arpeggiator and sequencer are also included, with the former able to play notes momentarily. The arpeggiator also allows for up to 16 notes to be entered in any order and held. Meanwhile, the sequencer can play internally or sync to external sequencers.

Future Retro has stated that their goal with the Vectra was to design an interface that is simple and to the point so that users have access to essential controls for performing with ease along with plenty of expression. This is evident from the four joysticks that allow users to alter multiple parameters simultaneously. In addition, sound parameters and settings can also be edited with ease using the eight encoders with built-in switches. The Vectra even has two displays, with the smaller one used as a visual aid to see waveforms, signal levels, and modulation signals. In comparison, all parameter values for the sound and sequencer are displayed on the larger one.

The total cost of the Vectra is $1,100, with a deposit amount of $40 required to pre-order. Future Retro believes that shipping will begin around Spring 2022, and once pre-ordering ends, the synth will list for $1,599. Each unit includes a printed manual, micro SD card, and power supply. For more information, including the full specifications of the Vectra, visit the official website.