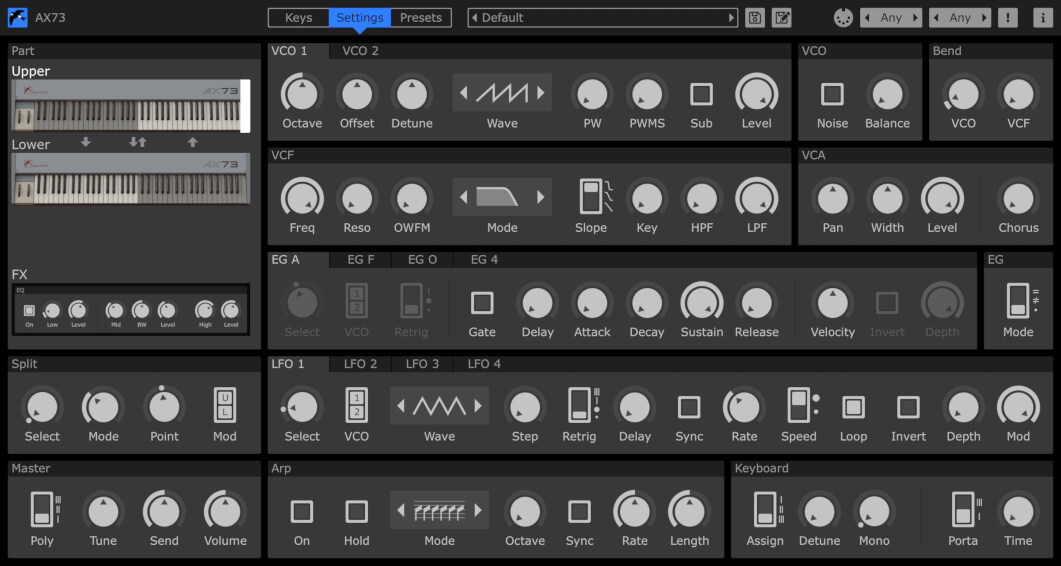 While most of the classic synthesizers from the eighties have received some form of emulation at this point, it is interesting to see some of the more obscure ones get another chance to shine too. One of these is the Akai AX73, which according to Martinic, ended up flying under the radar back when it was first released despite its proudly all-analog signal path. This is why Martinic has taken everything that was great about the AX73 and created its own software emulation.

The Martinic AX73 boasts four analog oscillators across two synth layers along with unique modulation features, extended performance options, and an eight-module effects section. Best of all, none of the menu diving of the original hardware is required as everything is modeled through Martinic’s Advanced Circuitry Emulation technology. The plugin has a Settings view for instant access to all of the synth’s controls and also comes with a lineup of 600+ to get users started.

Along with the Settings View for quick editing, Martinic has also emulated the look of the original hardware but upgraded it with more functions to avoid menu diving. A preset manager makes it easy to quickly save and sort favorite presets into collections that can even be exported and shared with friends. Users can process the synth’s output with eight built-in effects units that include a compressor, phaser, flanger, chorus, delay, reverb, distortion, and EQ. It is also easy to route the effects in any order you like by dragging and dropping them in the FX Chain. Martinic made further improvements by borrowing some of the best elements from other synths in the AX range. For example, the plugin features the extra chorus settings and the arpeggiator from the AX60 along with the second VCO and sub-oscillator from the AX80. Even the extended VCO octave range from the AX60 and 80 makes an appearance.

Compared to the original hardware, the AX73 plugin offers far greater modulation capabilities. Three of its four envelopes per layer are assignable, and it has four assignable LFOs per layer. It also has two layers that can be split across the keyboard, making it possible to either play two patches simultaneously or stacked. Each layer even has its own independent arpeggiator with 11 built-in modes.

Included with the 600+ presets are some by the likes of Nori Ubukata, Summa, and Synth Guru Wiffen. The original AX73 hardware presets are available for download at launch for free from the Martinic website.

AX73 is available now with a 50% launch discount for the price of $59.50 USD. The software doesn’t use a dongle or online activation but is protected by FastSpring. Users who want to try out AX73 can download the free trial from the website. When it runs in demo mode, white noise is added to the output signal

Check out the video below to hear the AX73’s Bass sounds and split keyboard patches or visit the official website for more information.