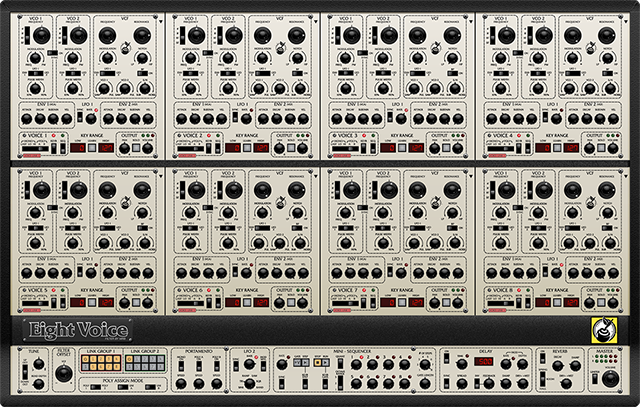 Cherry Audio recently announced the release of their most ambitious instrument to date, the Eight Voice. This new software synthesizer was carefully crafted to provide users with an accurate emulation of the 1977 Oberheim Eight Voice synthesizer. The Oberheim Eight Voice synthesizer was one of the instruments that helped to define the musical landscape of the seventies and eighties and is still highly prized by collectors. Unfortunately, not only is the original hardware incredibly rare and wildly expensive but also exceedingly fragile.

The Cherry Audio Eight Voice not only retains the remarkable sound quality and feature set of the original synth, but also a detailed emulation of the multi-mode filter, created by Mark Barton. Of course, as is expected from Cherry Audio, they have also added a few modern touches to their synth. These include the addition of a sub-oscillator and noise source for each voice as well as velocity controls for both envelopes. This enhances the sonic potential of the synth while providing expressive control over filter and amplifier dynamics. In addition, an expanded version of the Oberheim eight-step Mini Sequencer is also included. It features switchable step gating, adjustable gate length, pitch quantization, and much more. If that wasn't enough, Eight Voice also has a powerful mod delay and lush reverb section. The original instrument is quite daunting, but Cherry Audio has done its best to transform it into something fast and fun for their softsynth.

The new Eight Voice synthesizer has earned praise from the likes of Jezz Woodroffe, who is a film composer and former keyboardist for Black Sabbath and Robert Planet. Woodroffe bought one of the first Four Voice Oberheims when it came out, so he knows a thing or two about the original hardware. His enthusiasm for the softsynth is shared by Christian Matthew Cullen, former keyboardist for Night Ranger, and Fred Bensi, keyboardist for Missing Persons.

Cherry Audio's Eight Voice Synthesizer can be bought from their official website (https://cherryaudio.com/instruments/eight-voice) for only $29. A free 30-day demo is available for users why want to try it out before putting down the cash. It is available for both Windows and macOS in AU, VST, VST3, AAX, and standalone formats. Check out the video below for a head-to-head sound comparison between the vintage Oberheim Eight Voice and the Cherry Audio Eight Voice virtual instrument.