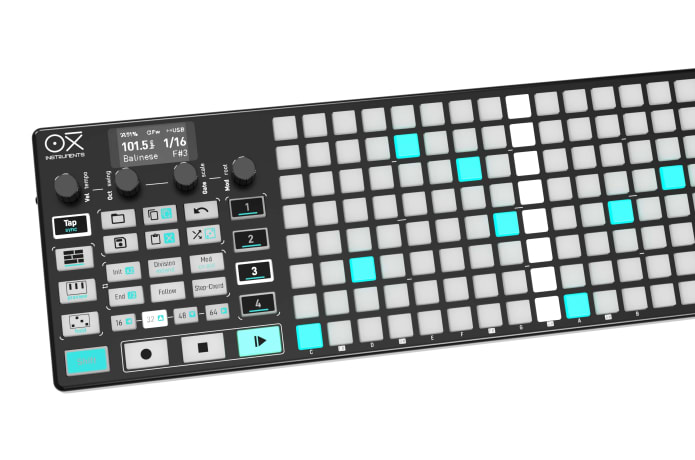 OXI Instruments, an independent company from Spain, has recently launched an Indiegogo campaign for the OXI ONE. OXI Instruments promises that it will bridge the connectivity gaps in the studio and on the stage in more accessible ways than ever before. The company also stated that they believe OXI ONE will perfectly match any rig and work as the centerpiece of professional live performances. These are lofty claims, so let's take a look at what OXI ONE has to offer.

The specifications for OXI ONE highlight four fully configurable sequencers with four modes available per sequencer and more to come. It can handle up to 32 tracks and up to 128 steps per sequencer. OXI ONE also has a full-featured performing keyboard with dedicated layouts and a song/arranger mode with dedicated interface and pattern launch options. It has a chord mode with +150 chord variations and an intelligent HARMONIZER mode. In addition, it has 4 LFOs, routable to internal parameters, MIDI, and voltage control, along with four loopers and four arpeggiators with multiple independent modes. You'll also get eight CVS, eight gates, and 1 CV input that is fully configurable and routable. Finally, it has an intelligent pattern randomizer, and the whole thing comes in a solid and compact build that is battery-powered.

Those who prefer cables can also connect OXI ONE using the BLE or USB cable. OXI Instruments also announced a special add-on for the OXI ONE called the OXI SPLIT. It is an efficient and inexpensive solution featuring one MIDI DIN Input and two MIDI DIN Outputs. This is useful for users who want to control more equipment through DIN connections as OXI ONE features MIDI TRS ports to be more compact and lighter.

The OXI ONE Indiegogo campaign launched on the 4th of May 2021 and will finish on the 3rd of June 2021. According to the campaign timeline, the final hardware revision will occur on the 15th of July and the certification process on the 15th of August. Manufacturing will then begin on the 15th of September, followed by the assembly of the first units in October and testing and shipping in November. OXI Instruments expect that the rest of the units will be shipped by the 25th of December 2021.

The Indiegogo campaign has a fixed goal of about $24,000, which was smashed within a day. At the time of writing, the campaign already had close to 400 backers. Backers can pledge €530 EUR (about $636 USD) to secure an OXI ONE Sequencer, which is 24% off the future retail price, and it ships worldwide. However, keep in mind that while the OXI ONE has Arrow Certification that it is feasible for manufacturing, there is no guarantee of campaign delivery.

Check out the video for OXI ONE below and let us know on the forums or in the comments what your thoughts are in regards to this sequencer and MIDI controller.