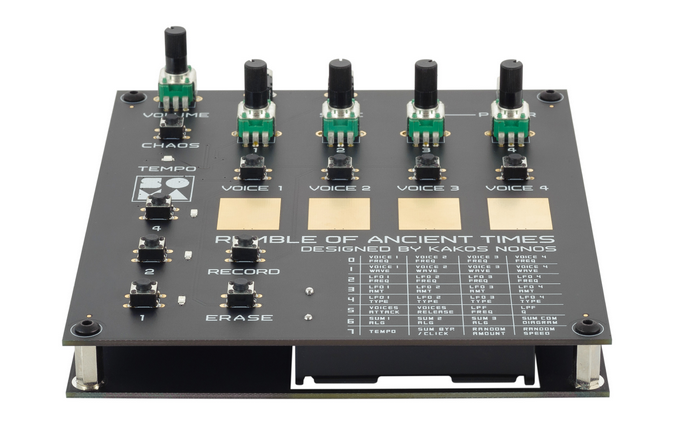 Anyone who fondly remembers the early days of PC gaming will be glad to hear that SOMA Labs plans to release an 8-bit noise synthesizer and sequencer called Rumble of Ancient Times (RoAT). According to them, it was inspired by the clever programming of that era when an entire video game could fit on a floppy disk. RoAT is a compact and portable instrument, but SOMA Labs have stated that it contains enough elements that can be combined to create surprising musical results.

Rumble of Ancient Times features four sound oscillators, each sporting a tunable waveform and individual LFO to modulate the tone or volume of the oscillator. Even more exciting, each oscillator's modulated signal is mixed with other signals using more than 1500 variations of complex summing algorithms. SOMA Labs have revealed that these contain FM, ring modulation, bitwise logical operations, and much more. In addition, it has an 8-bit resonant lowpass filter with a distinct Lo-Fi character and a built-in sequencer that can be synced to an external device or send clock out.

Despite being built on a very simple 8-bit microcontroller, which SOMA Labs claims is similar to the ones used in old refrigerators and other simple electronic devices, RoAT has many features. This is due to some clever programming and SOMA Labs's drive to celebrate and emphasize what can be achieved with efficiency of code and the use of chips most industry leaders deem "obsolete." With RoAT, Soma Labs is also making an ecological statement by using chips that were developed and produced decades ago in an innovative way instead of turning them into trash. Considering the damage caused by planned obsolescence, it is definitely a much environmentally friendlier approach.

The Rumble of Ancient Times was designed and programmed by a newcomer to the SOMA development team, Kakos Nonos. With RoAT he was able to create something that is battery powered and can work up to 130 hours on just one set of four AAA batteries. RoAT is 122 x 136 x 40 mm in size and weighs 145 grams.

The official SOMA Laboratory website lists the net price of RoAT as 130 euros, which excludes VAT, shipping, customs, and money transfer expenses. Sales are expected to start in January/February of 2022, but those interested in RoAT can email them to sign up on the limited waiting list. Check out the demo video for Rumble of Ancient Times below and visit the official website for more information or to download the manual.