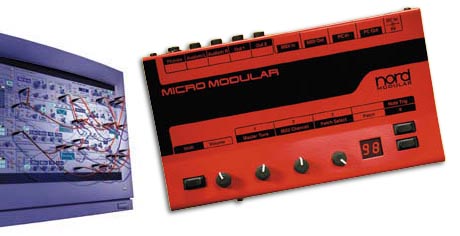 The Nord Micro Modular is a somewhat stripped down version of the massive Nord Modular system. Like the Nord Modular, a PC computer is used to virtually patch, tweak, edit and design your synth patches in a modular fashion. However the stand-alone keyboard interface has been replaced here by the very small four-knobbed Micro Modular interface. The software is the exactly the same as the original however the controller itself which houses DSP power is considerably less than that of the original - reducing this units polyphony from 32 to 4 voices or less and multitimbrality has been stripped away. Software version 2.1 adds many new features including a Ring Modulator, 14-Band FilterBank, Vocal Filter, FM Sine wave, Digitizer (bare-bones sampling) and many more tricks.

After you've created a patch using the software you can load it into one of 99 memories within the controller. It can then be used live or in a MIDI studio as a synth module. The simplified controller has a volume knob and 3 other knobs that can be assigned editable parameters. Limited as this might appear, you still get one of the biggest and most powerful modular synthesizer emulator programs in the world. The Micro Modular System is a fraction the cost of the Nord Modular and would be a powerful complement to any serious musicians arsenal. Be sure to get the latest OS version which is v3.03. It's been used by Autechre, u-ziQ, Speedy J, Kid606, Somatic Responses, Heretik, and Ixy.