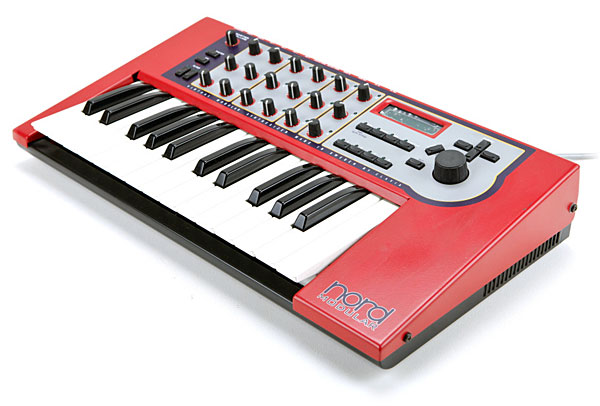 The Nord Modular is Clavia's Nord synth with modular abilities using virtual sound modeling. The keyboard itself is small and compact. It houses the synth engine and all DSP processors. However, the Nord Modular must be connected to a Pentium PC with Windows 95 or a PowerMac. Be sure to get the latest OS version which is v3.03.

The software is the Nord Modular Editor. It is simply an editor, but a powerful one that graphically shows you a the modules you want and is where you graphically make patches between modules and synthesize a sound. It features over 100 modules! It's true modular synthesis meets computer synthesis. It sounds awesome too! The keyboard still has MIDI to be controlled and sequenced from your standard sequencer. The programs you create in the editor can be stored on the computer or in one of the 100 memories in the keyboard. Once you've created a sound you can quit the editor program and use the keyboard controller stand-alone.

The keyboard has multiple outputs, pedal input, has a very easy and intuitive layout and a nice LCD screen. It also features a very good sequencer! The Nord Modular system is expensive but it's like a Nord Lead 2 on steroids and without limits! If you're not interested in the keyboard, a desktop/rack-mount version was also available.

Audio Clip 1 Here are some great pads and sounds.
PatchesThese are 19 custom patches by Markus Jentsch. They are zipped for Windows/PC.
ManualDownload the original owner's manual from SoundProgramming.net.