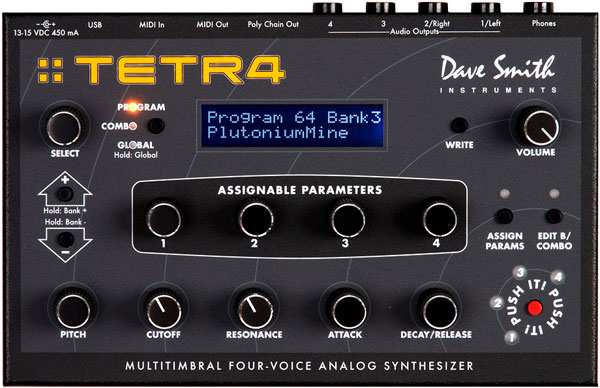 The Tetra is another Dave Smith designed piece of analog wizardry that sits somewhere between their Prophet '08 poly-synth and its monophonic desktop module counterpart, the Mopho. In fact, other than the new Prophet '08 themed paint scheme and knobs, the Tetra's case and layout is virtually identical to the Mopho. What the Tetra offers is four-voice polyphony and multitimbral capability using the same acclaimed analog technology of the Prophet '08. It is essentially four Mopho's in one, or a mini Prophet sound module.

The Tetra is state of the art, but features a 100% analog signal path. Its voice architecture is based on the Prophet '08, with two digitally controlled analog oscillators per voice, but with the addition of sub-octave generators for each oscillator. There's a resonant lowpass filter utilizing classic Curtis chips with switchable 2- or 4-pole modes, three DADSR envelope generators, four LFOs, an arpeggiator, and a 16 x 4 analog-style step sequencer (per voice). There are also over 20 different modulation sources and over 40 modulation destinations, as well as a noise generator.

The on-board controls are minimal yet functional. The most important "tweak" knobs are here: Filter Cutoff, Resonance, Attack and Decay/Release. Proving that Dave Smith knows how musicians like to use his instruments, the Cutoff and Resonance knobs are real potentiometers, while all the rest are detent rotary encoders (the Mopho only uses detent encoders). This means you get smooth filter sweeps when turning them, rather than stepped changes, which is especially crucial for slow gradual moves. An additional four assignable parameter controls are front-and-center and can be assigned to affect any other parameters per patch. Although all parameters of the Tetra can be controlled from the minimal front panel, a free Mac/Win patch editor is also available to really dig in deeper for serious synthesizing.

The "Push It! Push It!" button is sort of a novelty, but cool nonetheless. Pushing it is a way to audition the current patch. If the patch has sequence data, the Push It! button will trigger the sequence to start/stop. In addition, LEDs around the Push It! button labeled 1 through 4 will light up to indicate which of the four voices are being used (whether you are triggering sounds from the Push It! button or from MIDI/USB controllers).

Tetra has three operational modes: Program, Combo, and Multi. In Program Mode, the Tetra is a four-voice polyphonic synthesizer with four banks of 128 programs. As with the Prophet '08, each program contains two layers—each layer is essentially a separate patch—that can be used to create keyboard splits or stacked sounds. Banks 1 and 2 are the Prophet '08 factory programs; banks 3 and 4 are a combination of Mopho and new programs. In Combo Mode a different program can be assigned to each of the four voices. Use it to create 8-oscillator thick unison patches, or diverse complex patches, or highly animated cycling patches that trigger up to four different sequences (remember each voice can have its own sequence). In Multi Mode, the Tetra can be used as a multitimbral sound module capable of playing up to four monophonic parts on four MIDI channels, with separate outputs for each voice.

The Tetra has some serious I/O for such a small package. There are four outputs: mono, stereo, or per voice. There's also a headphones output. MIDI In and Out/Thru ports, plus the Tetra is the first DSI model with USB 2.0 for direct connection to your computer or DAW. Finally a dedicated MIDI output called Poly Chain allows the Tetra to be chained to other Tetras, Mophos, or Prophet '08s for increasing the polyphony of your DSI instruments. Up to four Tetras can be poly chained to each other (16 voices), or two Tetras can be poly chained to the Prophet '08 (16 voices), or one Mopho can be poly chained (5 voices). Also of note, the Prophet '08s front panel controls map directly to almost all of Tetra's parameters when poly chained. Alas, there is no audio input available (something the Mopho does offer).

The Tetra—four Mophos in one, four-voice poly synth, four part multitimbral synth with individual outs, Prophet '08 expander, or mini-Prophet '08—the Tetra is a big synth in a little package. It is a real analog subtractive synthesizer with all the modern features you would expect in the 21st century. If the Prophet '08 is outside your price range, or maybe you feel the mono-synth trend embraced by the Mopho is unnecessarily limiting in this day and age, then the Tetra should surely fill that sweet spot in between. It has been used by Morgan Page and Radiohead. 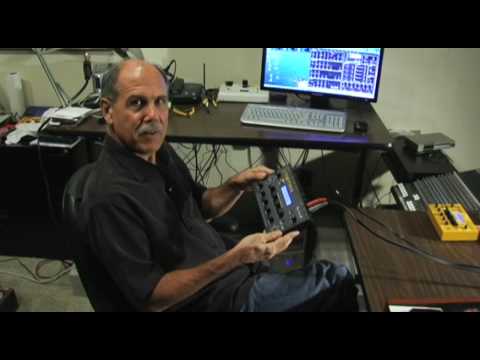 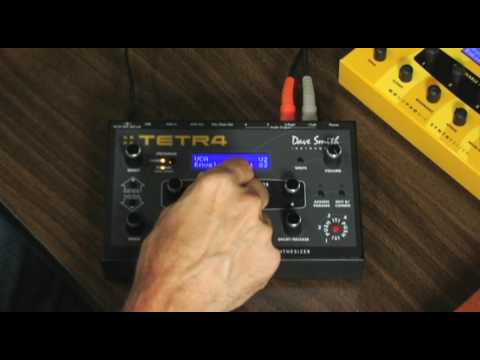 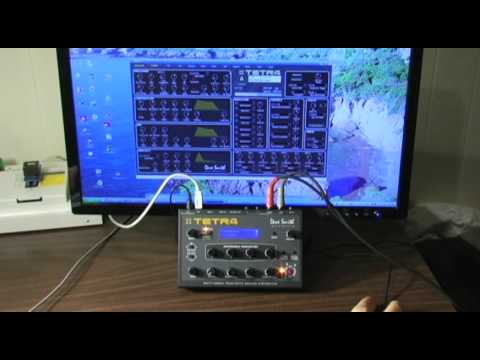 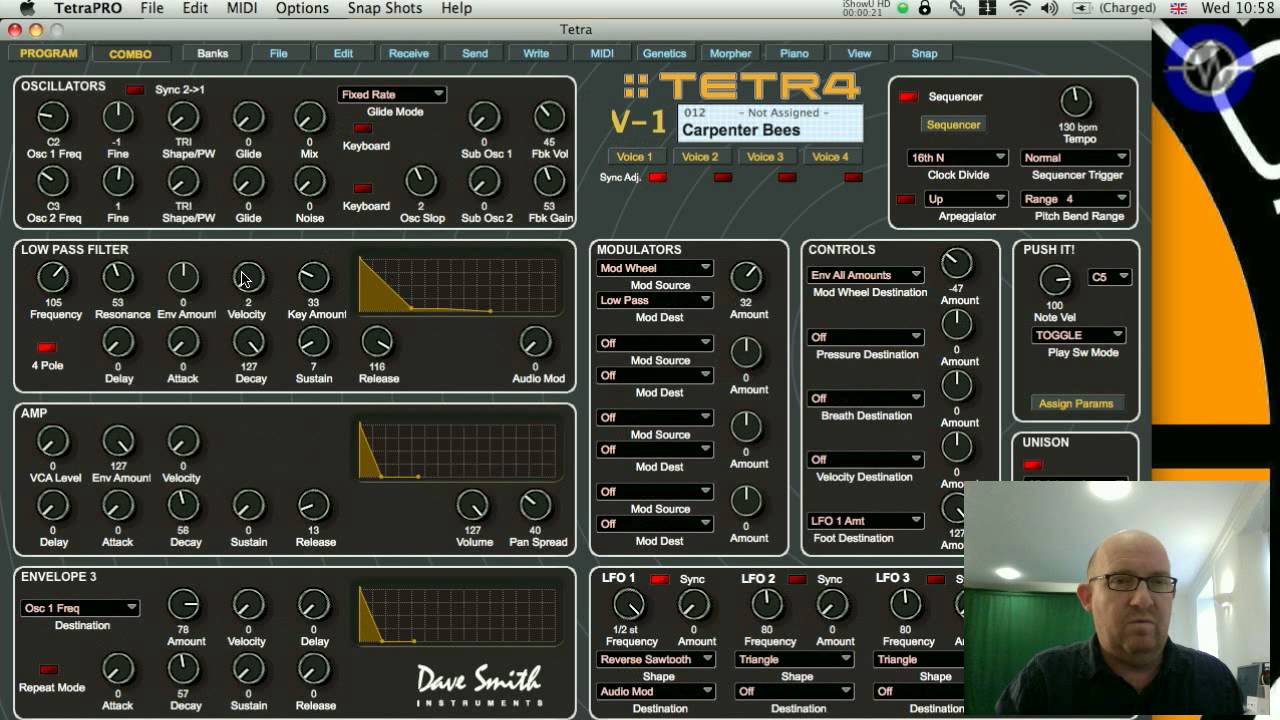