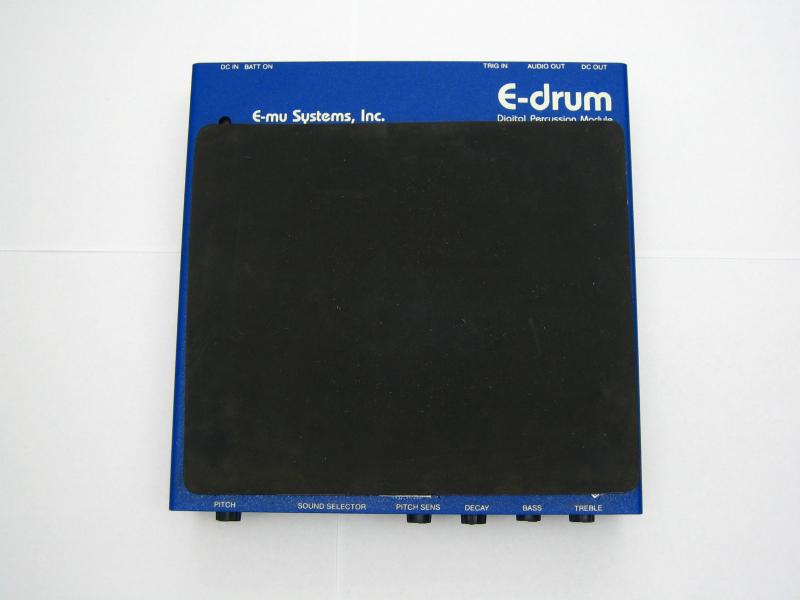 E-mu Systems had a string of successes in the '80s, but the E-Drum was unfortunately not one of them. It was released for the first time in 1984 in the wake of their Drumulator but was not destined for the same greatness. Of course, all the blame can not be leveled at E-mu as it was actually Clavia DMI in Sweden that developed the actual hardware. E-mu Systems experienced issues with the E-Drum right off the bat as they needed to perform considerable work on the electronics as well as the mechanical tolerances before they could officially start with production. This was a big setback for the already cash strapped E-mu Systems as they were relying on sales from the Drumulator to stay afloat after delays in getting their Emulator II on the market. Unfortunately, even after the E-Drum reached the market, it failed to really find its target audience due to the price as well as relying on keyboard distributors to try and sell something aimed at drummers.

In terms of hardware, the E-Drum consists of a single, touch-sensitive drum module. It offers 40dB of volume range and all its internal sounds stem from a removable cartridge. This cartridge holds up to four 8-bit samples that are stored in 16kB of EPROM. There were actually a number of different sound cartridges available and these could be swapped out for new sounds. The E-Drum also supported optional hardware assembly, which allowed users to construct their own modular drum kit.

Notable features of the E-Drum includes a pitch control as well as a Decay control. With the pitch control, it is possible to tune the pitch up or down or leave it in the middle position for no effect. The sensitivity of the pad can be adjusted and the loudness depends on how hard you hit the pad. The idea was to make the E-Drum suitable for any style from light finger taps to heavy sticking. Finally, the front panel also has controls for adjusting the bass and treble content of the sound. The back of the unit holds the slot for the sound cartridge as well as connectors for audio output. In addition, it has a multi-purpose control input, which allows the module to be triggered from synthesizer gates as well as audio signals. Although the E-Drum is powered by two 9-volt batteries, it also has an optional AC power adapter on the back.

The E-Drum was interesting for its time, but it is obviously very outdated compared to decent drum machines and never found its niche as E-mu expected.