The Emulator is a very old and classic keyboard sampler from E-mu that rocked the world in 1980 as it was truly the first affordable compact modern sampler. After E-mu flopped with its grossly expensive Audity analog polysynth, they sought to design a sampler, loosely inspired by the Fairlight CMI but much more affordable. The Emulator I debuted in 1981 with a price taag of $10,000! Still pretty expensive, but E-mu reduced its price to $8,000 a year later.

The Emulator is very big, it's not very pretty and it uses big 5" floppy diskettes! Its look was designed by the same people that designed the Apple II computer. The Emulator has eight voices of polyphony and some may have MIDI retro-fitted as well although they never originally came with MIDI. It had very primitive controls by today's standards. Only real-time looping and trimming was possible, for example. And sample memory is really slim with its tiny 128 KB good for about two seconds of sampling time...and that's with its lo-fi 8-bit 27 kHz sampling specs.

The Emulator was soon surpassed by the Emulator II which added far better controls, a data display and memory space. The Emulator is most responsible for E-mu's longevity and success, and the Emulator makes a great collector's item even though it does not cut it as a usable machine these days. The Emulator has been used by David Bowie, Depeche Mode, Herbie Hancock, Genesis, New Order, OMD, Jean-Michel Jarre, Kitaro, Vangelis, Yes, Philip Glass, filmaker/composer John Carpenter, and Stevie Wonder who bought the very first one! 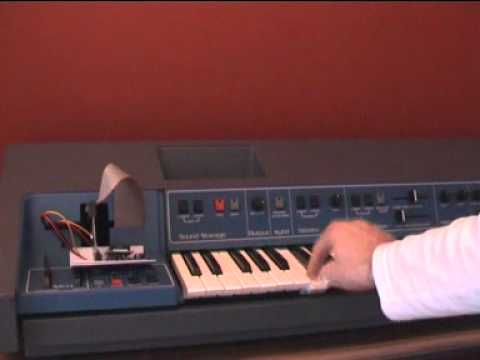