The Emulator III was E-mu's biggest classic "Digital Sound Production System". Also called the "EIII", it was E-mu's biggest and most professional sampler-synthesizer prior to the 1990's. It was the first sampler to offer 16-bit CD-quality specs with stereo or mono sampling at 44.1kHz or 33kHz. RAM memory is 4 MB expandable to 8 MB. There are extensive and modern sample editing features (from looping to rate conversions). The on-board 16-track sequencer and arpeggiator are also superb. Equipped with MIDI, SMPTE, SCSI, built-in disk-drive and multiple outputs, the EIII is comfortable in any studio. A Macintosh can also be hooked up to the EIII for easier graphical editing which was very useful since the LED screen on the synth is so tiny.

As a sampler workstation the EIII was at one time the dominating force. Although modern machines far exceed it today, the EIII is still a quality instrument with controls and functions that would be familiar to anyone who uses samplers. A very classic machine that can still stand strong among a generation of sampler workstations 10 years later, the EIII is still in use and will continue to be used for many more years. It has been used by Depeche Mode, Genesis, and JellyFish. 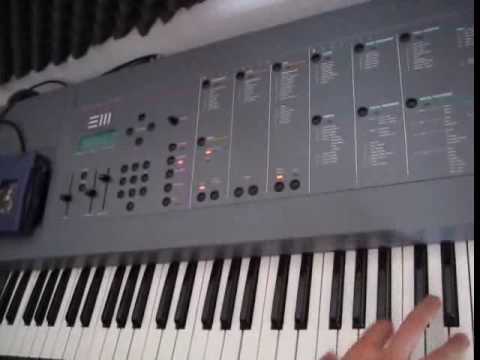