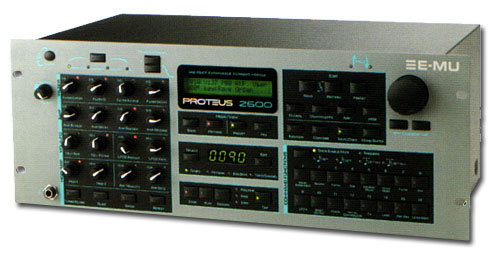 The new Proteus 2500 is basically a 4-unit version of the 128-voice Proteus 2000 rack module with much greater real-time controls and some other new tricks! The Proteus 2500 has got over 30 real-time, programmable knobs and buttons. It features the exact same great Proteus 32 MB sound set of ROM samples, and can be expanded up to 128 MB with additional sound cards from E-mu's family of genre based sound modules, keyboards, and desktop groove machines. The sounds it ships with is called the "Composer" soundset, offering sounds that cover the whole spectrum of synthesizer type sounds, from real instruments to bizarre sounds and effects.

The Proteus 2500 features a built-in 16-track MIDI sequencer, with 16 MIDI channels per track! It offers both linear and pattern based recording, real or step time, analog grid/drum machine style programming and more. Unlike the Proteus 2000, the 2500 has 24-bit DAC outputs instead of 16-bit, for enhanced sound quality. The MIDI processors have also been redesigned and are three times more efficient now than on the Proteus 2000! The 2500 has six audio outputs, S/PDIF digital output and a USB port. This is the most powerful Proteus ever, and will likely be E-mu's flagship synthesizer module for quite some time!