The Proteus 2000 is a reincarnation of the economic Proteus rack module series of the early nineties. While its synthesis architecture is virtually the same as the original Proteus, the Proteus 2000 is packed with major new features, sounds and expandability for the most demanding professionals!

It features 128-voice polyphony and 32 MIDI channels allowing it to handle even your most complex MIDI sequences. It ships with a whopping 32 MB of sample ROM memory which is expandable up to 128 MB using four internal ROM slots! The sounds it ships with are called the "Composer" soundset, offering you 1,536 presets (1,024 ROM, 512 user). The sounds cover the whole spectrum of synthesizer type sounds, from real instruments to bizarre sounds and effects.

As seen on previous Proteus modules, there are six individual polyphonic outputs. But unlike its predecessors there are now multi-mode resonant filters (plus 50 Z-Plane filters passed down from the Morpheus and UltraProteus). Plus four real-time controls allow you to access any of up to 12 parameters, giving you instant control over your sounds right from the front-face of the module. The Proteus 2000 is a light, compact module designed for use with sequencers. It can be your main sound module, or one of many. Either way there's an immense amount of great sounds at your fingertips for any music application! A 64-voice keyboard version is available too, the PK-6 Proteus Keys. 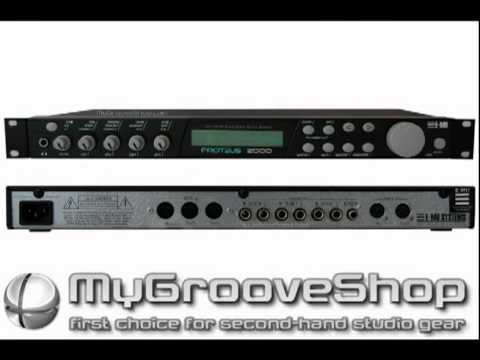