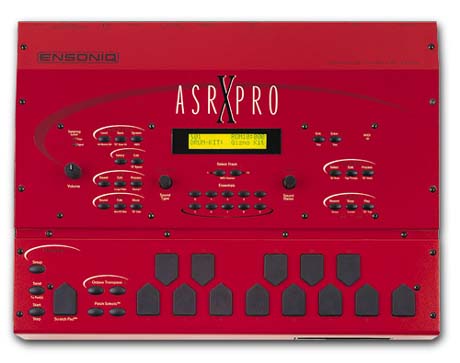 The ASR-X Pro Resampling Production Studio. An enhanced update to the ASR-X, the ASR-X Pro is a sampling, synthesizer, sequencer and effects studio in a single tabletop unit. For a machine that's competing with the Akai MPC3000, the ASR-X Pro is a worthy opponent. It's got professional sampler specifications, and easy yet professional sample editing features. Process your samples with modern edit functions including copying, truncating, reduce bits, scaling, normalizing and inverting. It has enough built-in effects to sweeten your samples with: EQ, Reverb, Chorus, Flanger, DDL, Distortion, Tunable Speaker, Chatter Box, Vocal Morph, and Auto-Wah. Sequencing is also easy and hands-on. Microscopic Tempo control and resolution allow for punchy groovy sequences with plenty of feel and note capacity. There are also independent dual multi-mode dynamic digital filters with low-pass, high-pass, variable bandwidth band-pass, resonant low-pass and resonant band-pass.

What separates the ASR-X Pro from the ASR-X? The Pro now offers a SCSI interface for limitless storage to disk or drive. A cool new Flash OS system means you can upgrade it simply by inserting a floppy, no messing with ROM chips! There's a new Stomper program that synthesizes phatt analog drum machine sounds (a built-in drum machine) - giving the MPC3000 a run for its groove. Memory can be expanded to a whopping 66MB for over 12 minutes (mono) sampling time. There is also a very cool Resampling technology that allows you to digitally resample sounds, loops or sequences with any effects and tweaks you've applied back into itself. Optional upgrades beside memory include the ESP-2 effects chip, EXP 24MB sound and wave expansion board and the X-8 eight output expander. The ASR-X Pro is compatible with virtually everything including most sound libraries and sampler libraries.

Audio Clip 1 Some demos on the ASR-X Pro, from the Future Music CD, issue 77.
ManualDownload the original owner's manual from SoundProgramming.net.