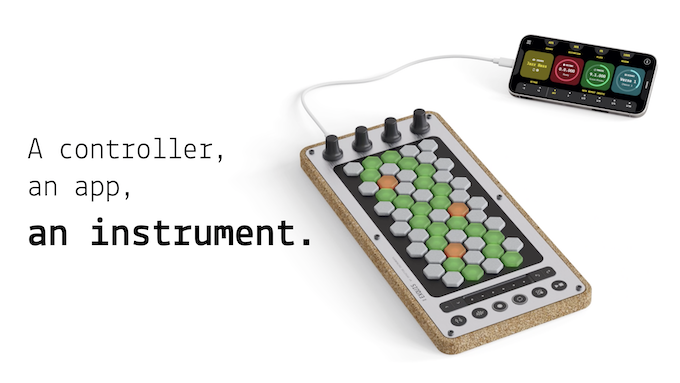 The French company Intuitive Instruments, formerly known as Dualo, has launched a Kickstarter for Exquis, an expressive MIDI controller and an intuitive creation app. Intuitive Instruments saw success in 2012 with the release of the Dualo Du-touch and in 2016 with the Dualo Du-Touch S. According to their Kickstarter page, with Exquis, they figured out a smarter way to play and compose today’s music “that makes it intuitive and logical for anyone.”

Exquis features a patented layout that makes chords easy to play and places notes that sound well together right next to one another. It is designed to lead users down the right path by choosing a scale and following its illuminated path. Since it provides users with the fastest access to the rules of harmony, it makes it easy to improvise even without any theoretical background. Intuitive Instruments also lauded the unique and spontaneous workflow of Exquis, which allows users to play, record their own loops and create entire songs in a matter of minutes.

From a design perspective, Exquis was inspired by the finesse of acoustic instruments. According to Intuitive Instruments, the keys or firm enough to play percussion and short notes with precision but still soft enough to modulate long notes with sensibility. In addition, Exquis supports MIDI Polyphonic Expression protocol so that users can sculpt their music with emotion. It even has four clickable potentiometers and a touch slider for more sound and music control possibilities.

Along with the keyboard, users can also use the Exquis multi-platform app for what Intuitive Instruments describes as easy and chronological music production logic. Although most of the typical actions can be performed using only the keyboard, advanced actions that require some time programming can be handled via the app. The app even makes learning easier as it can be used to display musical scores directly on the keyboard. Users can then follow the lights to play songs shared by the community or even imported from MIDI files. Finally, the app provides contextual help about any functionality and even music theory with a single touch.

The Exquis keyboard is designed to be played anywhere, and its powerful LEDs make it useable outdoors. It is compatible with any external battery, and the app will be available for iOS, Windows, Mac, and Linux. Of course, since it is a MIDI controller, the Exquis keyboard is also compatible with leading DAWs and plugins such as Logic Pro, Ableton Live, FL Studio, Reaper, Garage Band, and more. It can even be plugged directly into modular synths thanks to the CV outputs: GATE, PITCH, and MOD. Finally, while the Exquis app is obviously optimized for the Exquis controller, it is also compatible with most MIDI controllers.

The Exquis Kickstarter launched with a $59,047 goal, and at the time of writing, already achieved success. Intuitive Instruments has a few unlocks planned if the goal is exceeded. These include a greater choice of casing materials, an additional soundbank, the ability to loop audio in the Exquis app, and more than 250 interactive tutorials. A common concern with most electronic devices these days is the scarcity of components, but Intuitive Instruments have stated that their supply of the main parts is ensured. For more information or to pledge your support visit the official Kickstarter page (https://www.kickstarter.com/projects/dualointuitiveinstru/exquis-the-smartest-way-to-create-expressive-music).