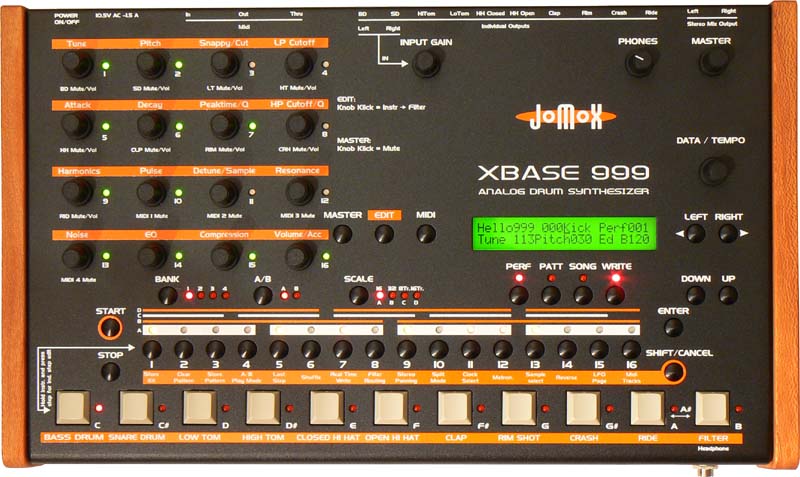 The Xbase 999 is a now-discontinued analog drum synthesizer that was first released by JoMox in 2006. It remained in production until about 2013 when it was discontinued.

According to JoMox, the Xbase 999 is a drum machine that consists of nine instruments. Four of these instruments are completely made up of advanced analog discrete circuitries. This allows for true analog sound that is then combined with the advantage of full digital control of all parameters. The remaining instruments of the Xbase 999 are based on short 8-bit samples, which in turn are then processed by an analog VCA envelope. With the Xbase 999, JoMox attempted to affect the analog sound production as little as possible by using D/A converters that are integrated into the circuitry and specially adapted to the parameters. The result is that there is almost no delay when it comes to the parameter control for each trigger. In addition, the stereo filter of the Xbase 999 allows for independent control of cutoff, Q and resonance. Finally, the Xbase 999 has a classic step sequencer with step LEDs. It allows for the editing of various quantizes for each track and step along with four additional programmable Midi tracks that can trigger external instruments.

The front panel of the Xbase 999 is dominated by buttons, knobs, and lights, but everything is laid out in a logical manner. On the left side, you'll see four rows with four encounters and these are assigned to different functions depending on the selected mode of the instrument. An LED next to each encoder also indicates whether an instrument is muted or not. The black text beneath each encoder indicates the functions in "Master" mode while the text printed in the orange bar above each encoder denotes its function in the "Edit" mode. In "Edit" mode the LEDs also light up green for selected instruments to indicate which parameters are editable by the knobs.

On the top right of the front panel, you'll find the Input Gain, Phones and Master knobs while the 2x24 character LCD display is located in the middle. To the right of the display, there is a Data/Tempo knob for editing parameters that are chosen by the "Left" and "Right" cursor buttons directly below it. To the left of the LCD, there are three buttons, Master, Edit, and MIDI. These are used to switch between the three modes of the Xbase 999. The area at the bottom of the front panel is dedicated to the Bank, A/B, and Scale buttons as well as Perf, Patt, Song, Write, Down, and Up. Down here you'll also find the Scale Bars, Step 1 - 16 buttons and LEDs along with the Instrument keys.

The Xbase 999 is housed in a metal steel enclosure with wooden end cheeks to provide an attractive finish. Overall, this was a good drum machine for its time with the only complaint at the time being that the large number of knobs can be a pain to work with. 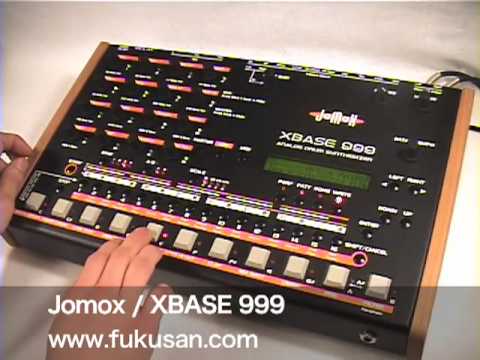