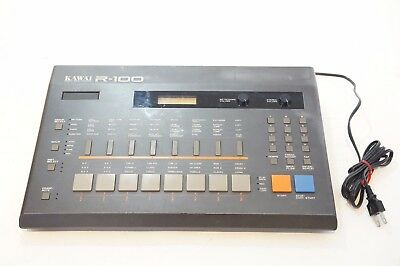 The R-100 was the first digital drum machine released by Kawai in 1987, not counting the preset drum machines that could be found in their multi keyboards and home organs. It features 24 basic sounds that are instantly usable and has eight individual outputs. While recording the samples Kawai used a 12-bit PCM format and a 32kHz sample rate, so the results are generally quite impressive for the time. Kawai split the samples into eight banks of three samples each and gave each of these banks a touch-sensitive pad. Thanks to the touch-sensitive pads it is easier to make patterns sound a bit more dynamic and the sensitivity of the pads is also adjustable along with the sensitivity of each instrument.

Programming a drum track using the R-100 consists of first creating a pattern, which can have up to 99 beats per bar. You can then link the patterns together to create a song and link songs together to create a chain. To make things a little easier, the R-100 has a 16x2 character LCD screen, which is backlit, so it remains useful in dim environments. Unfortunately, the small size of the LCD means that there is just enough space to see song and pattern information. Thankfully, the R-100 has several editing features that make it easier to change things or correct any errors you might have made. This drum machine also has a memory cartridge slot that is compatible with the RC-16 cartridge that is sold separately and can be used to store copies of all the information in the internal memory of the R-100.

The front panel of the R-100 features the LCD at the top with the memory cartridge slot to its left and knobs for metronome volume and stereo volume to the right. The keypad is situated on the right of the front panel along with buttons for tempo, timing adjust, start, stop/cont. start and so on. To the left are the Group Select, Multi, Inst Select and Erase/Note buttons along with indicators. The Command Select keys and instrument pads take up most of the space in the middle of the device. On the rear panel you'll find the power switch, SYNC IN/OUT jack, MIDI IN jack, MIDI OUT jack, and MIDI THRU jack. The Stereo output jack (R), Stereo output jack (L/MONO), and headphone jack are also on the back along with individual output jacks and jacks for TAPE/CLOCK IN, TAPE OUT, CLOCK OUT, the HH foot switch, START/STOP footswitch, TRIG, and METRONOME output.

Overall, the R-100 was a powerful drum machine for its time, but more importantly, it was also easy to use. The R-100 certainly had some appeal for the pro segment of the market, but Kawai still managed to keep the price reasonable as well. 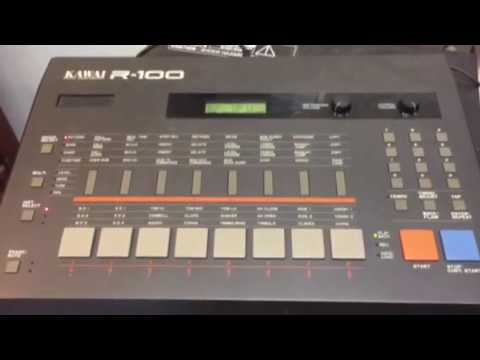 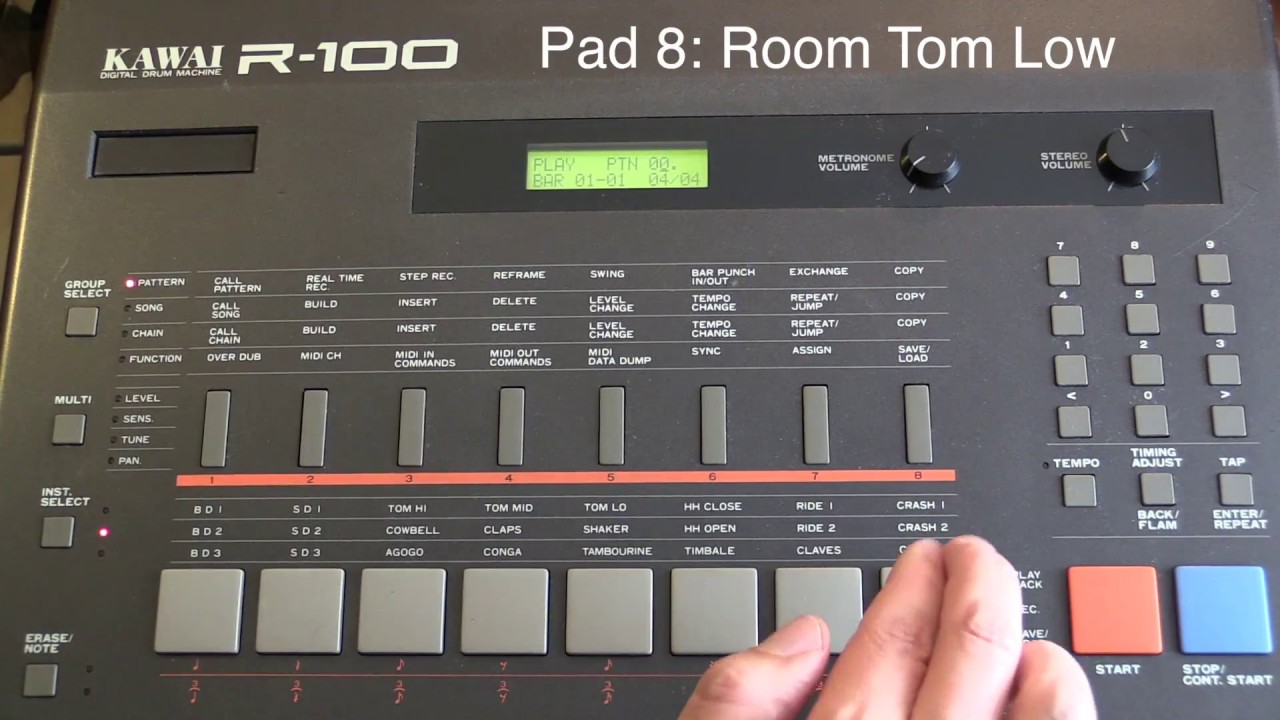