Kawaii released their K11, which is a ROMpler, in 1993. Since it features the General MIDI standard that was created in 1991, it is seen by many to be an update by Kawai to their K4, which was released in 1989. In reality, the K11 is simply the keyboard version of the Kawai GMega, which is the tabletop version of the same hardware with the same sounds. The K11 is also more simplified compared to the K4 as it features fewer effects, sources and modulation. However, in addition to GM, it does have dedicated drum processing. However, due to the use of too much reverb the drum kits do not sound as good as the piano effects of this synth.

The Kawai K11 features 61 keys that are pressure sensitive and has velocity. The keys are unweighted, but feel sturdy. Since the keyboard has a great feel, it is also used by a lot of players as a master keyboard. Although the K11 doesn't have MIDI THRU, it does have two MIDI INS and two OUTs.

In terms of audio, the K11 doesn't sound as good as a lot of other synths, although it does well with piano sounds. It features dual oscillators along with seven drum kits, and amplitude modulation. In addition, the K11 features dual high or low pass digital filters, dedicated four stage amp and filter envelopes.

On the front panel of the K11 you will find a pitch bend wheel, modulation wheel and increment dial. There is a slider for adjusting the volume at the headphone jack and output jacks, while next to it is the back-lit LCD display that is capable of 16-characters and two lines. To the right of the LCD display there are a number of buttons for changing between the different modes. On the rear panel you will find the power switch, the DC-IN plug, a stereo mini plug for headphones, and output jacks along with a hold jack that can be used for connecting a foot switch. Finally, there are two MIDI IN and two MIDI OUT jacks along with a serial interface for connecting a Macintosh series computer. In order to connect the K11 to another type of computer you will need to purchase a separate MIDI interface such as a card or external module.

The K11 features a PERFORMANCE mode, which is geared towards live performance playing as well as a COMPOSE mode. Overall, it is a very decent ROMpler for its time and the piano sounds in particular sound good, but there are better synths available. 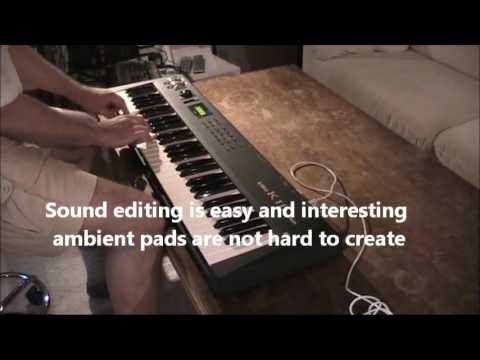