The KARMA represents seven years in the making. It's a synthesizer based on the engines and effects of the Triton series. KARMA is a music workstation with a revolutionary new phrase technology. Generate grooves, arpeggios, effects and more, all in realtime with plenty of knobs, switches and joysticks for hands-on control. You can control the rhythmic complexity, harmony, melodic repeat, phrasing, panning, effects and more from these knobs! KARMA is designed to create techno arpeggios and effects, natural sounding glissandos, and many other animated sounds and dynamic effects. KARMA lets you play complex moving synth parts that could normally take hours of programming. Just play some chords and twiddle the control knobs to vary the KARMA patterns, and let KARMA do the rest.

Like the Triton, KARMA features 62 voice polyphony and HI (Hyper Integrated) synthesis with 425 PCM multi-samples and 413 drum sounds. Patch memory consists of 640 user programs, plus 256 programs and 9 drum programs, 64 drum kits and 9 GM drum kits. Up to 8 patches can be combined, split, layered, etc. There is, however, no on-board sampler as there is in the Triton. But the KARMA technology more than makes up for this limitation with its revolutionary ability to generate totally random or fully controllable animated sounds, grooves, phrases, etc. which can't be found in comparable synthesizers. A splendid, studio-quality effects section offers 102 effects to sweeten your KARMA creations. In addition to an LFO, Alternate Modulation and Effect Dynamic Modulation enable you to further modulate the pitch, filter, amp, EG, LFO, etc. All modulation and KARMA functions can be synced to tempo or MIDI clock.

A built-in and powerful 16-track sequencer is all you need to generate complete music tracks with the KARMA. It can hold up to 200 songs, with up to 999 measures per song! Phrases generated by the KARMA function can be recorded into your sequences. Songs are created using a Cue List function to arrange up to 99 different sequences. The RPPR (Realtime Pattern Play/Recording) function lets you play phrases back by pressing a single key. And there are 150 drum and percussion patterns provided. You can jam along with the RPPR function or the Song Play function, using KARMA effects in realtime and in sync! Excellent for live use as well as in the studio. 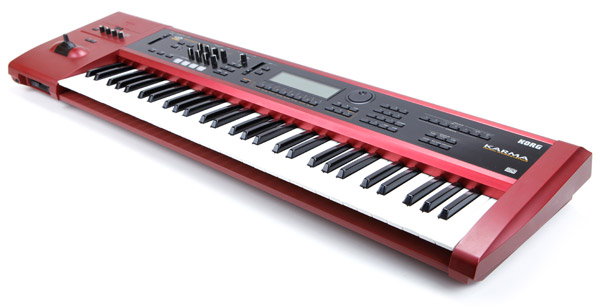 KARMA - Kay Algorithmic Realtime Music Architecture, developed by Stephen Kay, Karma Lab LLC. The KARMA function separates every aspect of a musical phrase into independently controllable parts. It features over 1000 Generated Effects (1 GE per Program, 4 GEs per Combi or Song). A GE contains over 400 parameters to generate notes, control synth and effects parameters, and provide randomization of these events. There are eight knobs and two switches to control up to 10 of the 16 KARMA parameters in realtime. Two Scene memories store current knob settings to recall them instantly. MIDI control messages can be used to control KARMA too. One KARMA module is available in Program mode, four modules can be used in Combi/Sequencer/Song Play modes. Classic Chord Memory is also available for playing entire chords with just a single key...Trance heaven! KARMA is an exciting new synthesizer technology that adds a whole new level of interactivity and variability suitable for just about any genre of music.

The new Version 2.0 operating system for the Karma Music Workstation is a free of download to all Karma owners and users. It works with the new KARMA MW, a computer software program (Mac/Windows) that allows in-depth access to all of KARMA's creative features. Version 2.0 adds 320 new locations for saving and storing User GEs. These can be loaded in via floppy disk or MIDI dump, and can be created externally using the KARMA MW Computer Software. Other new features packed into Version 2.0 include time signature and tap tempo control, intuitive real-time control, improved sequencing, true swing quantization, improved performance with external sequencers, and much more; all of which are mostly the result of user input and ideas. This upgrade to 2.0 and the KARMA MW software is a must have for all Karma users! Current famous users include Rick Wakeman, Phil Collins, Adam Holzman, Herbie Hancock, Peter Gabriel, Vangelis, Yes, Greg Phillenganes, Pete Townshend, and Keith Emerson.

Audio Clip 1 This sultry demo shows just what the KARMA can do. Hear more demos of the KARMA from Korg's web site.
ManualDownload the complete owner's manual from Korg here.