The X5D is an entry level keyboard from Korg. It basically offers Korg's acclaimed Ai2 sound engine (from the 01/w series) packed into a small, lightweight, affordable package! Being an entry-level keyboard, the usual luxuries such as aftertouch and an internal power supply have been omitted, and it lacks an arpeggiator or a sequencer, however it more than makes up for this in sound.

In addition to its General MIDI sound set, the X5D comes loaded with two banks of preset sounds that can be loaded alternately, however you can overwrite the preset sounds and store up to one hundred program sounds and one hundred combination sounds of your own. The preset sounds vary widely, from complex pads and SFX sounds, to pianos, organs and orchestral instruments. Some of these sound dated in this day and age, the piano sound is a little on the thin side to say the least, but the string, pad and organ sounds can still hold their own against much newer keyboards! Korg have even included some classic voices from their iconic M1 workstation. The famous 'Universe' and 'M1 Piano' sounds are present in the X5D.

Editing the sounds can at first be a bit like performing keyhole surgery. The tiny two-line screen means that a lot of the words are abbreviated, and a lot of scrolling and menu diving is required to edit the sounds. However, it is a relatively short learning curve. Once you have created some program sounds, you can combine up to eight of them in combi mode. This allows you to create really thick sounds and textures, but is also useful for creating keyboard splits and velocity switched setups.

The X5D is available in module form as the X5DR. 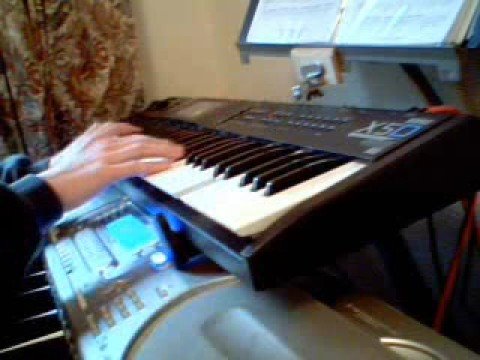 Images from here and CleverJoe.com