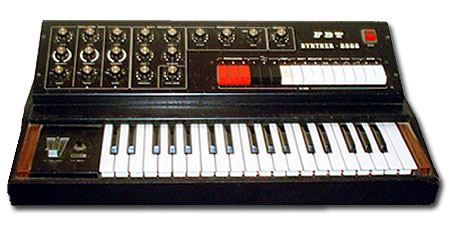 The Synther-2000 (introduced in 1973) was the first attempt from the Italian company FBT Electronica S.P.A. (founded by Bruno Baldoni and Vincio Tanoni in 1963, and mainly dedicated to the production of amplifiers and mix consoles) to introduce itself into the emergent market of synths. Later on, and also without much success, the same company would introduce the Synther-4000.

The Synther-2000 is a monophonic synth equipped with three VCOs (each with square and saw-tooth waveform generation) and based on the substractive synthesis method. It has also two simple filter & envelope sections. The filtering section is composed of a single filter with cutoff, a level control for each oscillator, and keyboard control, whilst the envelope control allows three different setups: AD (Attack/Decay), A (single Attack) and an interesting continuous attack (a rudimentary arpeggiator). It is also equipped with a noise generator for oscillators 2 and 3.

The Synther-2000 keyboard has 37 keys, but does not have pitch bend and modulation wheels. Instead, it has a slider for the continuous control of oscillator-1 frequency. In this respect, it does remind one of a Theremin sound. The Synther-2000 also possesses a sweep control that is very similar to the classic portamento effect.

Due to the small number of units made and their limited distribution area, at present it is really difficult to find one of these small pieces of vintage synth.