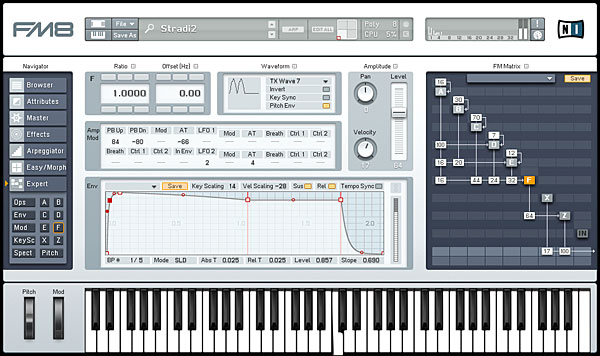 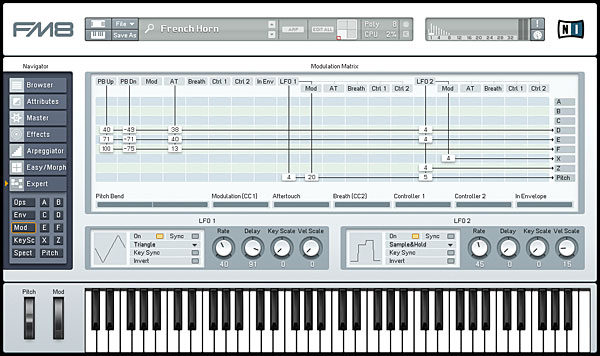 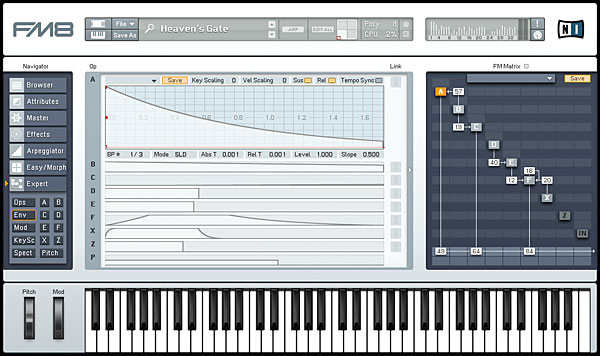 The successor to the award winning FM7, Native Instrument's FM8 continues where its massive predecessor had stopped. FM8 has an all new user interface and color scheme which looks nothing like the DX7-inspired interface the FM7 has. It's a powerful FM software synthesizer (VSTi, DXi, RTAS) which can be used for a wide range of genres. It has the potential to provide bread 'n butter sounds like a typical ROMpler would and is thus a synthesizer with the power to become one of the few software synthesizers you'll ever need. Forget about the complexity of algorithms found in Yamaha's DX-series and FS1r, FM8 has an FM matrix in which the user can define any FM path imaginable. Forget about the small two-line displays of the old days, FM8 has a clean user interface where every feature is one or two mouse clicks away and about every aspect of FM8 can be assigned to a controller via the MIDI learn button.

With multi-segment envelopes, multi-segment scaling curves and an extensive modulation matrix, FM8 is capable of very detailed sounds baring an almost human quality and realism. If anything, FM8 is a synthesizer which invites you back to the era where it was fun and rewarding to create new sounds from scratch again. Thanks to the many sound shaping aspects you can change with velocity, aftertouch and other controllers, FM8 can be exceptionally expressive and musical. Add to this a vast new effects section and within a minute you'll forget the FM beasts of yesteryear. FM8 grows on you like a fine wine; the longer you use it, the more you'll appreciate it. Every now and then you'll find out it's possible to craft sounds you never thought of as possible, a unique experience which sound designers thrive on.

The IN-operator becomes effective when FM8 is being used as an effects plug-in (called FM8fx). Any audio source that's fed into FM8fx can be used as operator output. It can modulate and be modulated by the FM8fx operators, giving practically infinite sound shaping possibilities. Evidently, a normal FM8 instance can (as a whole) modulate an operator in an FM8fx instance. Simply put: the output of a complete FM8 patch (including its effects!) can modulate a simple sine wave in an FM8fx instance. Use a sample player to feed a sample into FM8fx and you'll enter SY77/99 territory.

A practical aspect of FM8 is its low CPU usage. On a recent PC, multiple instances of FM8 together will easily give you hundreds of voices and tens of effects, which makes it a handy tool for any musical production. Sounds which FM8 does very well include all sorts of bells and chromatic percussion, DX pianos, organs, Rhodes, a wide range of basses, guitars, strings, lively percussion instruments, rich synthvoxes, classic stringmachines, woodwinds, brass, evolving pads, synthpads, expressive leads, harsh leads, sound effects, and all with fine musical expression and control.

FM8 is caviar for sound design gurus, which is something to keep in mind: it's still FM. FM may not be for everyone, it doesn't have the straightforward design of a traditional analogue synthesizer or even a basic ROMpler. FM-synthesis is vast, and demands more efforts before your sound sounds well, and even more efforts before it sounds musically expressive. Luckily, this isn't a DX synth with a complex user interface, and even novice users will discover that the basics of FM8 are not too hard to understand. From the perspective of the user interface, Native Instruments has done their job very well.

It has been used by Skrillex. 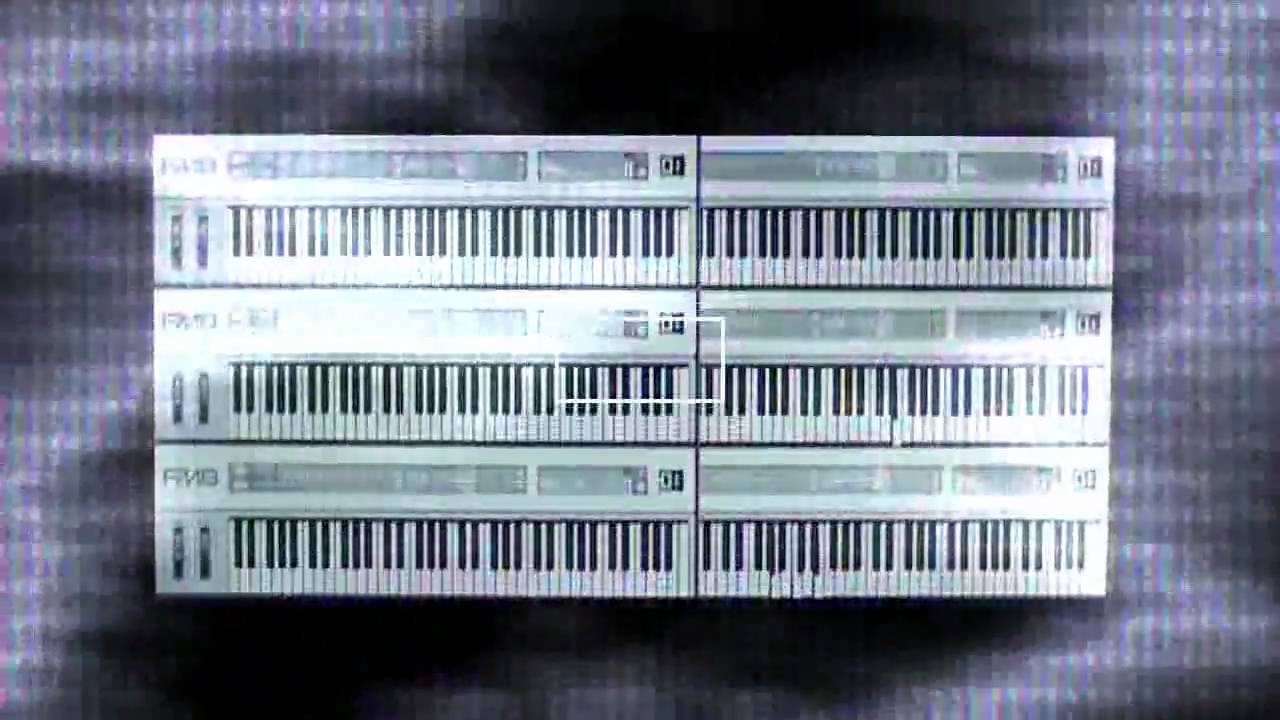 The Robots - FM8 Remix (more FM8 videos too)
by
mvsmsx