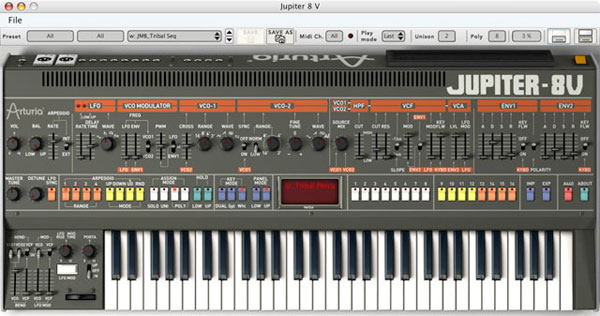 The Jupiter-8V is one of the sweetest synthesizers to come from soft-synth maker, Arturia. It is the first virtual analog replica of Roland's venerable Jupiter 8, a truly classic and highly sought after flagship polysynth from Roland's analog era, circa 1981-84. Arturia has faithfully and beautifully recreated the look, feel and sound of the original while at the same time adding many modern features and all at a very reasonable price.

The Jupiter-8V is a stand-alone, VST, RTAS and Audio Unit compatible software synthesizer utilizing Arturia's trademark TAE (True Analog Emulation) algorithm as the underlying architecture for its sound and synthesis. Visually, you see an almost picture perfect replica of the original Jupiter 8, with its fairly basic but surprisingly flexible and sophisticated layout. Along the top of the panel you have instantly familiar LFO, VCO, VCF, VCA and Envelope controls. Below that, a row of colorful buttons allow selection of Arpeggiators, Solo/Poly modes, keyboard modes, and patch selection - all very similar to the classic original.

So we know it looks the part, but does it sound the part? In a word, YES! The original Jupiter 8 was made famous by countless 80's musicians and superstars for its incredibly fat, sweet, lush, and clear synth sounds that rivaled the competition of its time from other polysynths like the Prophets and Oberheims. The Jupiter-8V proudly serves up over 400 high quality sounds right out of the box, many of which were programmed by talented sound designers & programmers. With so many sounds, Arturia have thankfully implemented a filtering system allowing you to narrow searches for sounds by Designer, Preset Type, Characteristics, Keyboard Mode, and more. Right away you'll find awesome Bass, Brass, EFX, FM, Guitar, Lead, Organ, Pad, Perc, Piano, Strings and more. The presets cover a wide range from boring to awesome - it's all about personal taste. But the real fun begins when you start to tweak your own sounds. All controls can be set to "Learn" any MIDI control source so you can tweak your favorite controls right from your MIDI controller.

Synthesis starts as a fairly basic affair, akin to the original synth. There are two VCOs, each with independent waveform selectors (saw, ramp, pulse or square) and range and tuning controls. A VCO Modulator lets you modulate the PWM and VCO 1 or 2 (or both simultaneously) via the LFO and Envelope 1 settings. The LFO offers four waves (sine, saw, square, random). There's a VCF (filter) switchable between 12 or 24 dB/oct with cutoff, resonance, Env mod, LFO mod and Kybd follow. There's also a separate Hipass Filter with cutoff control. The two ADSR envelopes can be used to shape and modulate the Oscillators and Filter. The Arpeggiator offers Up, Down, Up/Down and Random modes over 4 octaves. And the keyboard can be split or used in a Dual mode which is sort of like having two presets in one! The Pitch Bender can be adjusted to bend and modulate VCO pitch and/or VCF cutoff.

(Effects Settings for a Stereo Reverb)

Now, unlike the original Jup 8, the Jup 8V offers many new and welcome modern features that take the sound possibilities to the next level. For starters, patch storage is unlimited and instead of the 8 voices for which the Jupiter is named, polyphony is increased to 32 voices. But the biggest differences come from the new modulations and effects features. Among the new effects, there are two Voice effects available within the synthesis path including Chorus, Distortion, EQ, Phaser and Ring Mod. This lets you run the VCO straight through some distortion, for example, before the VCF (filter), and after the filter you can add another effect like EQ before the signal reaches the VCA. Additionally there are another two Patch effects that can be placed on the whole patch which includes Chorus/Flanger, Delay, Dual Phaser and Reverb. All the available effects have surprisingly flexible and complete parameters and settings for creating very flexible effects that go miles beyond the original capabilities of the original Jupiter.

But the Jup-8V's flexibility goes even further with the Modulations section which offers a Galaxy module, a live Step Sequencer module (sort of like Reason's Matrix sequencer) and an advanced Keyboard module for programming Velocity and Aftertouch effects.

The Galaxy module is fascinating. It lets you create a sort of evolving motion based on two LFOs (free running or synced) moving in 2-D, the effect of which can be assigned to up to 6 destinations (VCO pitches, PWM, VCF cutoffs, resonance and VCA). With this you can create glistening pads and textures and effects that move like no other Jupiter can do.

The Sequencer module offers 32 steps per measure, and you can enter (or draw) which steps play certain notes, and you can add accent and glide effects and the sequencer can trigger up to 3 sources (VCO pitches, PWM, VCF cutoff, resonance or the VCA).

The Keyboard module lets you adjust Velocity and Aftertouch curves and assign them to up to 3 sources each (VCO pitches, PWM, VCF cutoff, resonance or the VCA) for incredibly lively sounds at each press of the key!

Playing with the Jupiter-8V right out of the box, it instantly captures the nostalgia and sonic history of the original Jupiter in a way that is both exciting and inspiring. It is undoubtedly the cheaper and smarter way to get your mitts on a Jupiter if those are the sounds you desire. But delving deeper into Arturia's advanced modulation and effects functions and all the other advanced features that make this a truly modern software synthesizer make the Jupiter-8V a clear choice for today's synth geeks looking for yesterdays sounds. But even those who are not so desperate for an analog replica, the Jupiter-8V is so flexible and sounds so wonderful that it will surely be a very useful and effective tool in any software-based musician's arsenal. This is definitely one of the best replicas and all around poly synths available in the software synthesizer format. 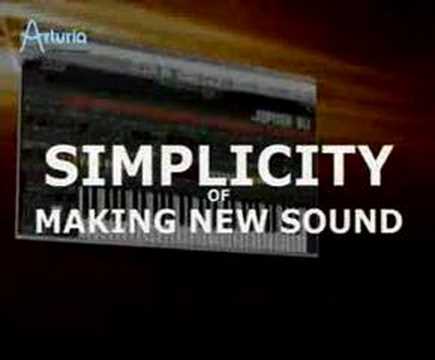