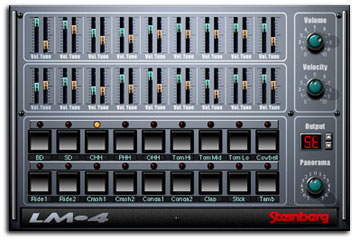 The LM-4 is a virtual instrument Plug-In that maybe picks up where the classic Linn LM-series Drum Machines left off. The LM-4 is a VST instrument for applications such as Cubase VST. There are no messy MIDI or audio cables, yet it is completely Midi enabled, automated, and its audio outputs are routed directly into the VST host's internal audio mixer, ready for adding EQ and effects.

The LM-4 features 20 Drum Kits with at least 18 drum sounds in each kit. The sounds are great! From classic to electro and retro! Ten kits were produced by the well known (:wizoo:) sound designers. You can also create your own drum sounds using 16 or 24 bit AIFF or WAVE files - essentially making the LM-4 a sequencing sampler plug-in! In addition, the LM-4 boasts that its timing is measurably better than any other MIDI controlled device! The LM-4 also features Polyphonic Drum Pads, automated tunings and levels of individual drum sounds and both stereo and 4 individual outputs. Finally, up to eight LM-4s can be layered and synced (depending on RAM and CPU) for elaborate percussion and music creation! 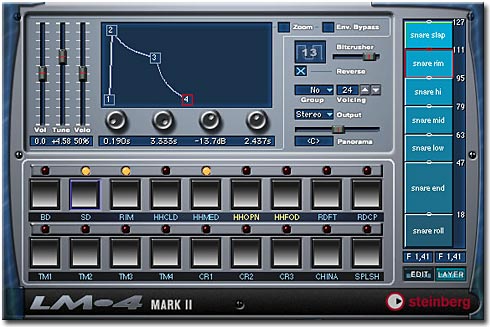 The LM-4 Mark II 32 Bit VST drum module released in 2002 builds upon the original to give you more flexibility and better sounds! The Mark II comes with a huge range of high-quality 24 Bit drum and percussion sounds that cover the most diverse music styles from Latin and Rock to House, Electro and Drum'n'Bass. The Mark II's enhancements include over 1GB of samples, 50 drum kits, drag and drop audio files, 20 velocity layers per pad, ADSR envelopes, Bit Crusher and Reverse, 12 outputs (3 stereo and 6 mono), volume, pan, and pitch automation. It also offers 16-, 24- or even 32- bit AIFF, WAVE or SD II (Mac only) compatibility. The LM-4 Mark II XXL is the LM-4 Mark II bundled with 70 additional high-resolution kits.