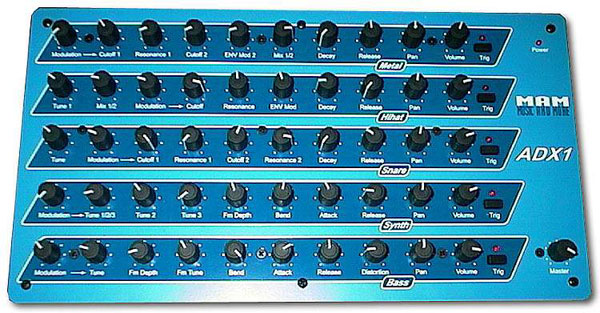 The ADX1 is a compact, inexpensive, all-analog drum synthesizer from German synth manufacturer Music And More (MAM). It has 50 on-board knobs to tweak its five analog drum sounds. These include Bass, Synth, Snare, HiHat and Metal. Each sound has ten rotary knobs that can be used to adjust a variety of parameters for that sound, such as attack/decay/release, stereo panning, filter cutoff and resonance, volume, FM depth and tuning. Sound quality is a bit noisy and a bit dirty — but in a good, analog kind of way. The ADX1 is rack-mountable with a metal faceplate that has been seen in both blue and silver color schemes.

Unlike many other drum machines, the ADX1 is purely a synthesizer—there is no on-board pattern sequencer. There is also a complete lack of patch memory. However, there is MIDI I/O, stereo outputs, individual outputs for each sound, and on-board Trigger buttons to fire off each sound from the front-panel which is useful when crafting the sounds.

As mentioned, the sounds are all analog. And all those knobs do allow you to create some great analog drum sounds—the kind that you might hear from Kraftwerk or Nine Inch Nails. The Snare and HiHat sounds both feature "open" and "closed" variants. The sounds can be quite unique, but also fairly capable of emulating most of the classic analog drum sounds of the past such as those from the Roland X0X line, although the Bass doesn't seem to have the same punch as a 909 kick. The Snare is a lot like the classic Simmons machines. Its HiHat and Metal sounds seem to get the most praise from users around the interwebs. The envelope and filter controls on the HiHat allow for some really cool animated HiHat patterns. And the Metal sound is more of an analog-explosion sound, rather than a ride or crash.

The closest competitor to the ADX1 out there would probably be the Vermona DRM. However, the ADX1 is far cheaper and grittier. The ADX1 ceased production when MAM was bought/sold to another company called Terratec. Its combination of modern MIDI implementation and internal circuitry with old-school analog sounds and low-budget construction make the ADX1 an affordable supplement to your existing synth studio, as well as very fun and capable entry-level analog drum synthesizer. 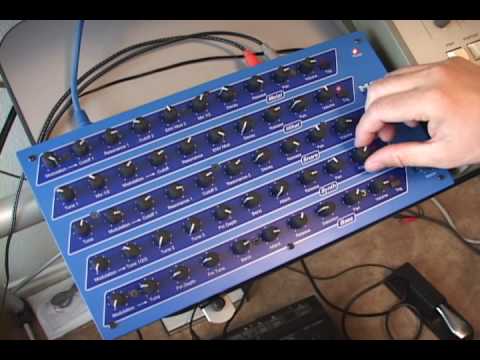