The M-Tron recreates this classic sound. It contains 28 classic tape banks including strings, choirs, flutes, brass, and some rhythms. Only one tape bank can be played at a time, but opening up additional M-Tron VST instruments allows you to layer different Mellotron sounds or create an ensemble! New to the Mellotron experience is the addition of two simple envelope controls: attack and release. Otherwise, the M-Tron makes a faithful recreation of the original white box. To truly recreate the sound of the Mellotron, Gmedia sampled each tape individually for each key on the keyboard. These samples are 16-bit and monaural, recorded from various actual Mellotrons, including Radiohead's Mellotron M400. 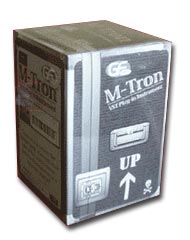 On the original Mellotron, the tape played for about eight seconds and stopped without looping. This led to inconsistencies in pitch and timbre and it is truly lo-fi by today's standards. It also made playing the Mellotron a tricky skill to master. These qualities could have easily been rectified in this new VST version, however Gmedia remained faithful to the original and maintains the unique lo-fi characteristics. Some modest enhancements have been made however, to bring the Mellotron a little more up to date. MIDI is fully implemented, with control over volume, pitch, tone, envelope attack and release.

A vintage Mellotron is a rare instrument to find, and an expensive one at that ($5,000+). M-Tron is an incredibly inexpensive way to get your hands on the closest thing to a real Mellotron (those brown rings you see above the keyboard in M-Tron's panel are simulated coffee stains, probably from the previous owner...). It looks and sounds just like the original, but is much cheaper and a thousand times easier to maintain - just load it up into your VST program and revisit the sounds of the sixties and seventies!

Check out the snazzy packaging for the M-Tron program. Just like the real thing...but better!

Audio Clip 1 Here are some demos of the M-Tron. Hear all the classic sounds and the new rhythmic sounds.
Audio Clip 2 The famous flute sound.