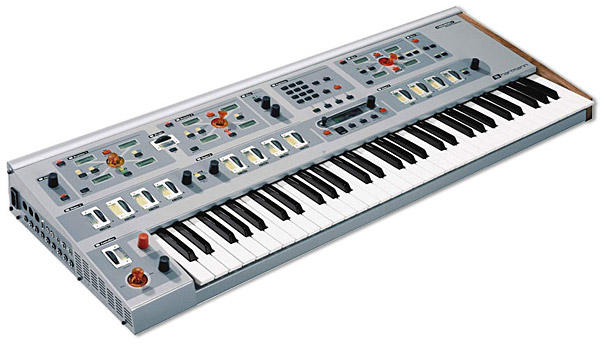 The German-made Hartmann Neuron was a polyphonic synthesizer that attempted to break new ground using a new form of synthesis and sound-modeling they say was based on technology found in neural networks. What the Neuron actually does is it analyzes audio files (samples) and creates digital computer models of these sounds which can then be re-synthesized and processed using the extensive amount of on-board data-wheels and joysticks with control of more 'musical' sonic aspects such as instrument shape, size and acoustic behavior. The joysticks allow for real-time tweaking of up to three parameters at once - 3D modeling in a true 5.1 surround sound environment.

The Neuron shipped with 200 modeled sounds already in its memory, but using their proprietary software application, ModelMaker (Mac/Win) a user can add their own sampled sounds to be modeled by the Neuron's neural network, and these can be stored in the user memory banks (sounds could be brought into the Neuron via analog, S/PDIF or USB connections). Instead of oscillators, the Neuron uses Resynators, of which it has two. Each resynator holds a single model (you can freely assign any models in memory to each resynator to build your sound). Each resynator has a joystick that lets you adjust the 'scape' and the 'sphere' of the sound. 'Scape' refers to the generation properties of a sound (such as the excitation source in a real instrument), 'sphere' would contain all parameters referring to the properties of the resonating 'instrument' body. The Neuron's Blender function lets you mix the results of the two resynators in a variety of ways, including morphing and crossfading. It even lets you manipulate one resynator using another.

The Silver section is the Neuron's filter and effects section. In addition to a multi-mode filter (24dB LP, 12dB LP, Bandpass), it offers two multi-effect processors (time-based FX like chorus, flange, delay and frequency-based FX such as phaser, distortion, compressor, limiter). You can use this section's joystick to adjust multiple parameters in real-time, like filter cutoff and resonance at the same time. The Slicer section is a type of 3D LFO, affecting Resynator 2 or the Silver section. The Mod section is another more traditional LFO with 12 wave shapes, routable to many destinations in the Neuron. Envelope generators offer three ADSR-type EGs per resynator, an ADSR amp envelope and a user-definable EG.

The Neuron's joysticks could also have their movements recorded so that their effect could become a part of the sound you are designing, further enabling you to create truly animated, swirling and moving sounds. To really get the most out of this, the Neuron also provided six freely definable audio outputs, which could be used in a true 5.1 surround sound format, and yes your sounds could be designed to swirl and sweep through the full surround environment. This made the Neuron very appealing to film composers like Hans Zimmer and innovative electronic musicians such as BT and The Arcane Paradigm.

In the end, the Hartmann Neuron story is like so many others in the synthesizer industry, of those that have come and gone. The Neuron is an amazing instrument and defines an entirely new take on synthesis and sound design. However, its incredibly steep initial retail price of about $5,000 and the fact that it turned out to be quite a tough synth to operate due to the limited display capabilities*, the instrument just did not sell well and by 2005 Hartmann and the Neuron went out of business. The Neuron is now a hard-to-find but special instrument, capable of awesome and often unpredictable results.

*Note: While we may have said the Neuron is difficult to use, we simply mean in terms of deliberate sound design. The Neuron is itself a beautiful machine with a very clean and logically laid-out control panel. The interface is incredibly tactile with mushroom shaped joysticks, pentagonal rotary knobs, a great 61 note keyboard and all ins/outs connectors located on one side of the instrument. It really is a pleasure to play with, but the difficulty is in understanding how to deliberately create a specific sound. More often than not users just play with the joysticks and knobs and wait and see what kind of sounds emerge. Only little LED bar graphs indicate what the on-board controllers are set to or doing.

It should also be noted that the Neuron makes unusual use of the USB port. It cannot connect to a computer USB port. Instead, a USB to Ethernet adapter must be connected to the Neuron, and the adapter connected to the computer with a twisted pair Ethernet cable. There may have been an interface provided by Hartmann originally, but second hand units never appear to have an adapter included, although any commercially available adapter appears sufficient. It is possible to open the Neuron and connect its computer motherboard directly to another computer using a USB bridge cable or by Ethernet to a home network or to another computer directly using a twisted pair Ethernet cable, but this would allow communication only with the Neuron's Linux operating system, not with the synthesizer portion of the Neuron. It appears it was unfeasible to design the Neuron audio card with Ethernet built in, thus limiting it to USB connectivity while still requiring Ethernet protocol as its only means of communication. The exact reasoning for this decision has not yet been discovered.

A software instrument version, the Neuron VS came out (2005) which offered everything the keyboard version did except for the 5.1 surround sound support and the master multi-effects section. It came with a mini USB-Neuron controller with one joystick and four rotary knobs. But it too, was expensive, for a soft-synth, at a $900 retail price. Definitely a more affordable way to get the unique sounds and experience of the Neuron synth, but like it's hardware counter-part, the Neuron VS is also a discontinued product. 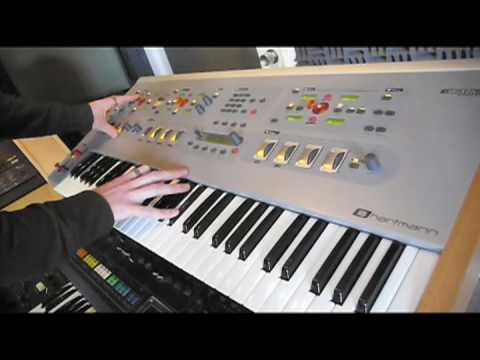