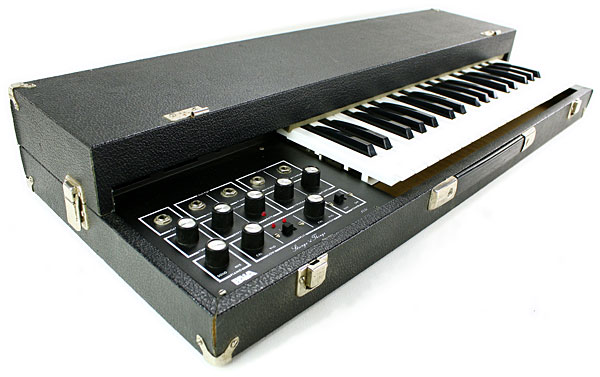 The PAiA Stringz ’n’ Thingz is a (do-it-yourself) kit made string machine. At the time it was released in 1978, it was the largest kit to come out of PAiA. It was also the first PAiA kit to come pre-assembled as an alternative option to building one yourself. The advantages of the PAiA kit products were cost-effectiveness. Pre-assembled or DIY, the parts were often inexpensive and you could get a fairly decent instrument for much less money than by going for a traditional commercial brand.

It's a pretty simple and straightforward affair. There are two tonal voicings (Strings and Piano) that can be played individually or together. The Piano sounds a lot more like a harpsichord, however. The Strings also sound a lot like the Piano sound, but with a much softer attack and a built-in chorusing effect for a thicker and shimmering sound. Both voicings are built on pulse-width waveforms only. Still, it is pure analog circuitry and the 3-octave keyboard is fully polyphonic.

The modulation and shaping capabilities of the Stringz ’n’ Thingz are minimal. Essentially there are only Modulation and Sustain controls. The Modulation is a simple LFO with Rate and Depth that modulates only the String section of the machine. The Sustain controls allow you to adjust the length of the release envelope for the Piano and String voices individually. Sustain jacks allow the release to be controlled via foot switches, pedals or control voltages. There is a keyboard split option in which you can split the lower Strings (Cello) from the higher Strings (Violin), and they can be assigned to either side of the split.

It's housed in a rugged flight case, with a cover that can latch shut for life on the road. The 1551 model offered a stereo output, but is less common than the 1550 model. As with any vintage DIY kit, build quality is of utmost concern. All in all, it's a fun toy, but not really worth the high after-market asking price they tend to sell for, unless you're a collector, in which case the rarity of this item makes it a good find.