The virtual Sequential Prophet-5 emulator from Native Instruments reached the next step in its evolution with this update to the Pro-Five, dubbed the Pro-52 model. The Pro-Five was a wonderful virtual recreation of the original Sequential Circuits Prophet-5. But the newew Pro-52 added many new features that made it an indispensable tool for any computer musician, offering some of the best and most compatible vintage synth sounds to modern musicians. 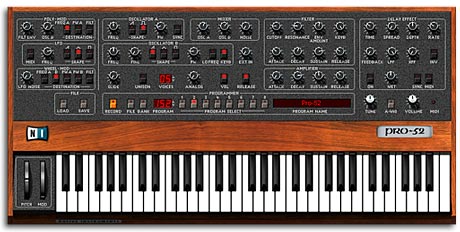 A new effects unit was added to the Pro-52 with echo, chorus and flanging effects. The Pro-52 could also be used as a stand-alone application and was no longer tied to the VST studio (though it still acts as a VST instrument seamlessly in any VST 2.0 or better system). The Pro-52 is able to import Prophet-5 SysEx sound data which means it can read and accurately reproduce all the existing sound libraries made for the original and allows your old P-5 sounds to be brought under the control of the very stable, reliable and clean digital domain. There's also an audio input capability for processing external sounds through its filters. 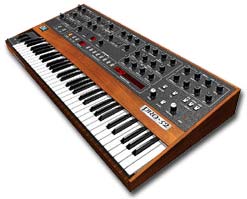 Unlike the original classic P-5, the Pro-52 offered unlimited polyphony, many times more preset memories, velocity sensitivity, MIDI automation of all available parameters and the option to run several Pro-52's in parallel. The Pro-53 was an updated version (late 2002) of the Pro-52 which added many new features and was also compatible with more Mac and PC audio interface formats including ASIO, DirectSound, MME, SoundManager, VST 2.0, DXi, DirectConnect, MAS/FreeMidi. 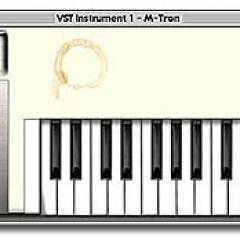