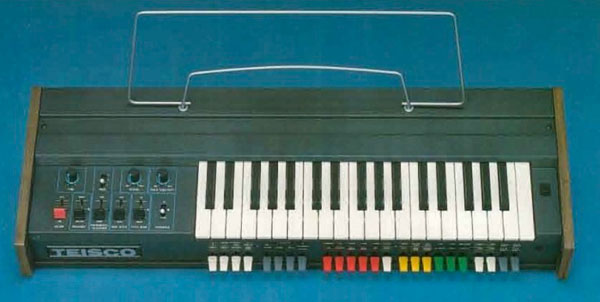 The Teisco S100P is a monophonic preset synthesizer from 1979. There were a number of such keyboards around at the time and earlier, including Roland's SH-2000 and the ARP Pro Soloist. They gave quick access to generic sounds, and were often designed to sit atop another keyboard, such as an organ.

A quick glance at the 32 sounds on offer might turn away those raised on modern Virtual Analogs with 1000 memories: tuba, flute, Hawaiian guitar, whistle…and yet, this is a surprisingly well-featured and useful little synth that still deserves a place in amongst its bigger, cleverer, more expensive brethren.

Teisco equipment can also be found under the label Kawai – the latter company bought the former and took some time to change the brand name. The Kawai model has a wood-effect front lower panel surround where the Teisco is all metal, but otherwise the two are identical. They originally came with a music stand that slots into two holes on the top; they are 37-key, C-C; they have 32 preset sounds that are selected using switches beneath the keyboard, and a left-hand control panel that sports basic performance features.

The sounds themselves are a mixed bag. Realism is not the 100P's strong point – bassoonists can sleep easy, and the monophonic piano seems slightly pointless – but many of them are a pleasure to play, and several are pretty usable. The bass sounds possess a solid low end, the shakuhachi is smooth and effective, and the four "synthe" sounds have a pleasing rawness. The limited tweaking afforded by the panel controls includes a clumsy pitch-bend slider, filter "brilliance", and modulation rate, as well as octave up/down, portamento (and glissando) time, tune, volume and three keyboard triggering modes.

Perhaps the most unexpected and interesting aspects of this modest little synth are its built-in reverb and assignable aftertouch. Reverb is of the spring type, with an effect level knob on the panel; aftertouch also has a sensitivity control knob to suit your playing, and can be routed simultaneously to several destinations, including pitch bend up/down, filter, vibrato amount and "growl". The degree of flexibility this adds to the otherwise simple sounds makes this synth much more expressive than many more patchable monos of the time. There is also an "effects" section allowing the switching of porta/glissando, hold/sustain, note repeat and – another nice feature – a flanger.

There is minimal interfacing here: high and low outputs, headphone jack, and an expression pedal input for volume control – but the advantage of this is that the 100P begs to be played. Forget your CV/Gate, your MIDI and USB – forget how many demisemiquavers you can quantize at 300BPM – flex your finger joints and have some fun!

NOTE: The underside of the S100P bears a sticker labelled "Manufactured under license from ARP Instruments Inc, USP 3,965,789". This refers to the "Electronic Musical Instrument Effects Control" – the aftertouch. 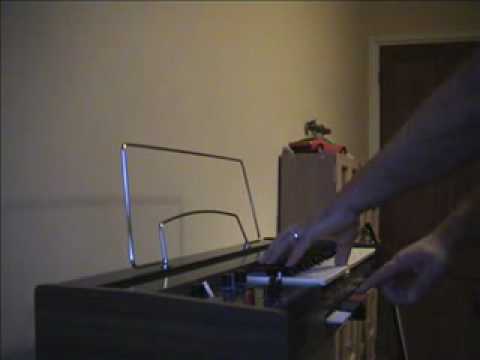 Image from The World of Musical Instruments Brochures