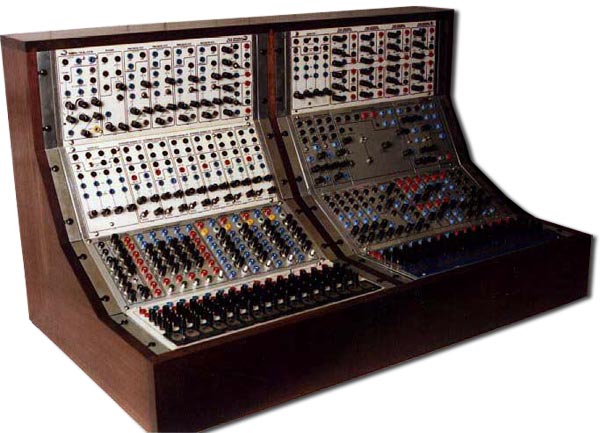 The Serge synthesizers are the creation of French electronic/synth designer Serge Tcherepnin. They are analog modular systems that began production in 1974, and continue to be produced to this day. The Serge concept was that a powerful, musical and great sounding analog modular system could, unlike the Buchlas, Moogs and ARPs of the time, be smaller, more compact and most importantly: cost less, making them far more accessible to musicians looking to jump into the bold new world of electronic music and sound design.

Although Serge was French, the modular systems that bore his name were orignally designed and produced in Los Angeles, CA. Initially designed in 1974 (in Serge's home), mass production of the systems began in 1975 and continued until 1986. There was a rough period between 1986 to 1993 where modules were still produced to special order (slowly), but full production resumed again in 1993 after Serge's circuit designs were sold to Rex Probe (an early collaborator) who went on to found Sound Transform Systems, who continue to produce many of the original Serge modules, plus a few new one's of their own design.

Influences of the Buchla can be seen in Serge systems, such as touch sensitive keyboards & sequencers, random voltage generators, function generators, and matrix mixers. Yet the Serge has many unique designs of its own such as the Wave Multiplier module and the use of banana plugs in lieu of traditional patch cords. Its filters are unqiue sounding but it may be the Wave Multiplier module that truly sets a Serge apart as it is a totally unique synthesizer section that sits between the Oscillator and Filter sections and allowed for external audio or control voltage signals to be used to modulate the timbre of the oscillator's tones.

Originally, Serge systems were custom built to order. Like any modular system a buyer would pick and choose individual modules they want and assemble them into a cabinet. However, to reduce the price tag and make them more accessible to musicians not interested in building a modular synth from scratch, Sound Transform Systems sells Serge systems in pre-configured systems: Shop Panels and the M-Class.

Shop Panels are complete systems that take up just 2 or 3 panel-spaces in a modular cabinet or rack-mount. There are essentially four model types: The Animal - a traditional dual oscillator design, the Blue Voice (and Blue Control) - a traditional three oscillator design, the Red Voice (and Red Control) - a more unique dual oscillator system, and the Soup Kitchen models which offer some of Serge's more ecclectic modules for sound manipulation and creation using external audio signals. 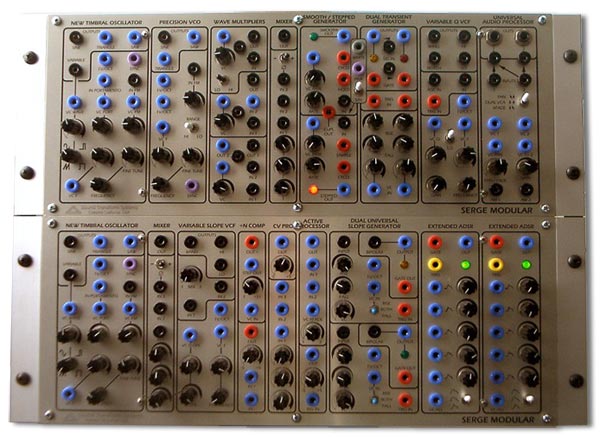 The Shop Panel (Animal on top, unknown config below)

The M-Class panels are more compact "half-width" panels that fit two to a panel or "M-Boat". Two M-Class panels joined by an M-Boat can be rack mounted or installed in a larger modular cabinet/system. Compact as they are, they are still considered complete systems, pairing anywhere from 4 to 5 modules into effective packages like the Creature - the smallest self contained Serge, to the Gator - a rhythmic pulse generator for bringing the sounds of another model (like the Creature) to life. The M-Class systems are intended to be mixed and matched and combined to create your own mini system without having to build a system from scratch, one module at a time. These smaller pre-configured systems can get you up and running and are a more affordable and intuitive way to build your own Serge, whether you choose just one M-Class model or a dozen! 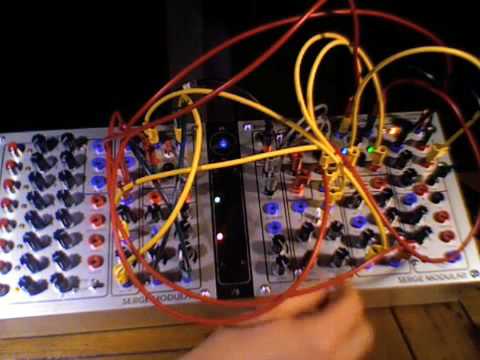