The Synthi Sequencer 256 (formerly the Synthi Moog Sequencer) was released in 1971 as a stand-alone version of what was essentially the same digital sequencer found in the monstrous Synthi 100.

In an era when synthesizers and especially sequencers were often more engineer-oriented rather than musician-oriented, the Sequencer 256 offered a very musician-friendly method of operation. It came enclosed in a wooden case with a full 5-octave keyboard, and looks more like a synthesizer than stand-alone sequencer. A sequence is created by simply playing notes on the keyboard—just as we still do to this day with MIDI-based sequencers. Up to 256 "events" could be stored. It will then play back the stored sequence with the same timing, note and note duration as originally performed. Even velocity could be stored, as it stores two voltages per event: one for pitch and one for velocity. Of course these control voltages could also be applied to other areas such as filter cutoff.

It also featured three Layers (aka tracks) for sequencing multiple instruments at a time or multiple parameters of an instrument, essentially overdubbing. A previously recorded track can be played back while recording on the next track. Record a performance on one track, overdub some filter cutoff moves on the second track, and add a backing part from another instrument on the third, performing it all in real-time.

Recorded sequences can be edited with sophistication as well. You can essentially fast-forward or rewind through your sequences, or move step by step. Zero-in on a note and it can be erased or modified. Changing a note will not have any effect on any of the notes before or after it. A special 4th track (or Layer) contains only pulse data that can be used for special timing applications, like creating loops of parts of the sequence, or providing clock to other external equipment.

The question is, does anybody really need one of these today? Of course not. But this is by now a rare 40-year old piece of vintage technology! In an era where "digital" was not yet a household word, and synthesizers seemed more like science experiments than musical instruments, the Synthi Sequencer 256 broke the mold. Absolutely state-of-the-art digital technology designed for a musician to play with. 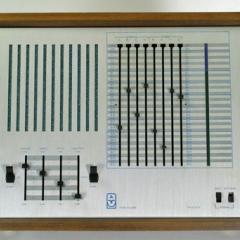