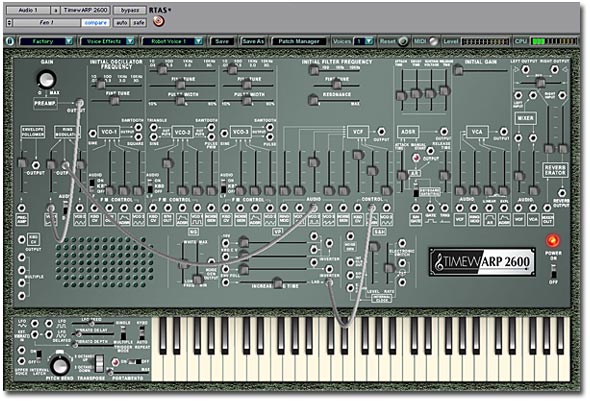 Way Out Ware is a relatively new company to the world of software synthesis, but they bring to the table a leap forward in synth emulation technology! They have recreated the classic Arp 2600 with their software plug-in, the TimewARP 2600. Rather than adapting a general purpose synth-modeling algorithm to suite the needs of reproducing ARP-like sounds, WOW designed this software from the ground up to specifically recreate every nuance of the original 2600's look and sound. And they succeeded! The TimewARP 2600 is supported and endorsed by the 2600's designer and ARP founder himself, Alan R. Pearlman. Of course there are some updates to the 2600 that adapt it to life in the computer age as well (total MIDI control & automation should go without saying).

TimewARP 2600 is (as of this writing) an RTAS plug-in and will only work in Pro-Tools 6.1 or later. But VST, Audio Unit, TDM, and stand-alone versions will surely follow soon. While the original 2600 is monophonic, the TimewARP can support up to eight voices of polyphony, but this can be quite a CPU gobbler and is really dependent on the power of your computer. The plug-in's interface is a very realistic recreation of the original "grey-meanie", with only a few tweaks or modifications. Patching and creating your own sounds is done just like on a real 2600. And finally you can store and categorize your 2600 creations using the TimewARP's unlimited patch memory manager.

But this is where the TimewARP can let some users down. It ships with a rather boring and small set of presets. In other words, if you were hoping to browse through oodles of patches to find the perfect bass, lead, or pad, you will likely be disappointed. That said, however, if you are one to experiment, you can really get into creating some amazing sounds if you know how or are willing to learn. The TimewARP 2600 is definitely aimed at those of us who maybe once owned a 2600 and are looking for an inexpensive and practical way of getting one back, or anybody who wants to learn and experiment with analog synthesis the old-school way!

TimewARP 2600 comes closer to sounding like the real thing than any other software synth emulator out there! The three VCO's sound great, the filter is excellent with realistic self-oscillating resonance and almost no glitchy stair-stepping during slow gradual filter sweeps. The envelopes, LFO, keyboard controls, and CV/Gate options give the keen programmer lots of options for creating some really wild sounds just like on the original 2600. Even the original's built-in spring reverb and a virtual ARP 3620 keyboard are reproduced here. Perhaps the TimewARP 2600 is a little too good at reproducing the original - the plug-in seems to generate a little bit of noise at it's outputs while idle just like most real analog gear would do.

If you've got yourself a Pro-Tools rig and the chops to program such a beast as the ARP 2600, WOW's TimewARP 2600 is a steal! At $250, no aging 30 year-old 2600 can come close to offering what this little plug-in can! And WOW's plans to add support for more platforms and to create an on-line user patch library should make the TimewARP un-beatable in the future!

Try / BuyVisit Way Out Ware's website to download a free demo and try it out for yourself!

Images from Way Out Ware.