The Minitmoog is a rare Moog preset synthesizer very similar to the Satellite. By preset sounds we mean sounds like Trumpet, Oboe, Clarinet, Sax, Taurus, Violin, Piano, Guitar I, Guitar II, Aries, Lunar, and Flute. It's a smallish keyboard with a 37 note keyboard. The sounds can be transposed down over 3 octaves for a wide pitch range. The pre-programmed sounds are switched via those clunky large flip-switches below the keyboard, apparently their location makes switching patches while playing more accessible. The Taurus, Lunar and Aries are interesting "new" sounds that were preprogrammed into the Minitmoog.

The group of fader type sliders for your left hand to tweak while performing offer nice hands-on tweaking useful for even todays performance situations. They offer controls for the filter, modulation and glide effects. The synth architecture has two VCO's that work together to produce a monophonic tone. However they can be tuned far apart or synced together for that fairly fat dual-vco sound! The Sync-Sweep effect really adds some motion to the sounds from the oscillators.

Aftertouch was employed on the Minitmoog. Sweep through the filter, sync sweep, bend the pitch or modulate the sound with pressure sensitive keys that produce more effect the harder you press! In some respects it was ahead of its time. However the lack of programmability and memory storage leave much to be desired with the Minitmoog. 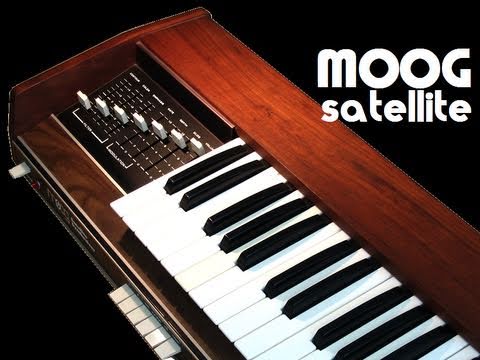