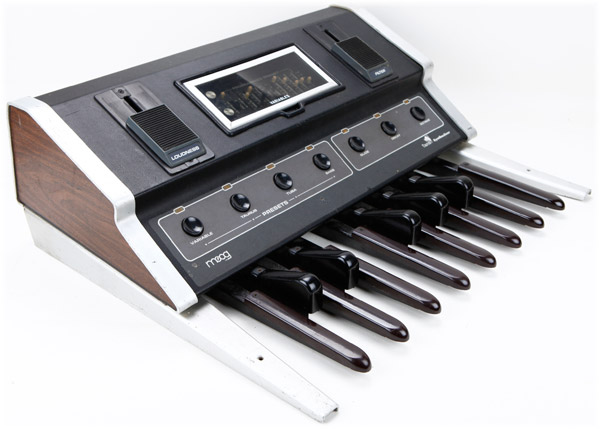 Inspired by organ pedal boards, Moog released the Taurus Pedal Synthesizer - a monophonic analog bass synthesizer you play with your feet (so you can play other instruments with your hands). Originally, the Taurus was going to be part of a larger ensemble system called the Constellation. It was to include two keyboard synthesizers, the Apollo (polyphonic) and the Lyra (monophonic), and the Taurus foot pedalboard synthesizer. The Constellation project never made it to production, but the Taurus was released on its own, while the Apollo keyboard went on to evolve in to the Polymoog.

The Taurus has three Preset sounds and one User programmable. The three preset sounds are Bass, Tuba and Taurus. Most users prefer the Variable preset which lets them synthesize their own sounds using the simple VCO, VCF and VCA controls. The shaping controls are hidden behind a plastic window to prevent accidental foot tweaking.

The Taurus is monophonic, with sound generation coming from a simple two-oscillator design that can be tuned across a 5-octave range. An Octave button lets you shift the pedal keyboard up or down an octave, the direction must be set using the Octave switch in the Variables section. There's also a Glide (portamento) effect and a Decay effect. The amount of Glide and Decay are also set in the Variables section. Like any Moog, there is a 24 dB/oct lowpass filter with controls for Emphasis, Contour Amount/Attack/Decay and Cut-Off. Two gigantic foot-sliders flank the sides of the Taurus and they are used to adjust the Filter cut-off and VCA Loudness on the fly using your feet. It has been used by Rush, Yes, Genesis, U2 and the Police.

Lookup Prices for Taurus I 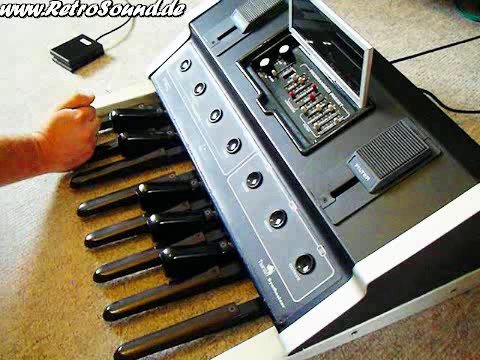