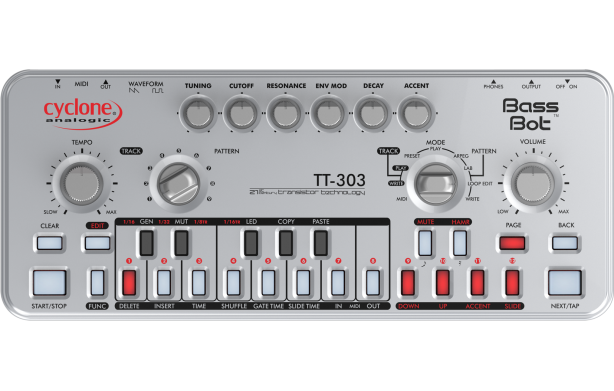 As the name suggests, the BASS BOTT TT-303 V2 by Cycle Analogic is another synth that attempted to recreate the famous TB303. However, instead of being a straight-up clone, this synth actually attempted to add a few new features and improvements to the classic original. This is a good thing as the Roland TB-303 is without a doubt one of the most bits of hardware of all time. The TT-303 V2 is not the first time that Cycle Analogic has attempted to replicate the TB-303 either. It is the follow-up to the original TT-303 and some refinements have been made along the way. It's also important to note that the TT-303 V3 is actually a hardware update, not to be confused with the V2 operating system update of the original TT-303.

The most obvious change is that Cycle Analogic redesigned the TT-303 giving it a more elegant and modern look compared to its predecessor. Not only does it have new pots and knobs, but it is also slightly larger and less of a direct clone in terms of the overall design. Another useful update is the ability to customize the colors of the LEDs for things like identifying your patterns.

The TT-303 features a sequencer with 432 user patterns and up to 64 steps per pattern. It also comes with more than one hundred preset patterns divided into nine different styles. In addition, the pattern lab allows for the creation of up to 108 user patterns. Since it uses non-volatile memory no batteries are required for this either. The swing and shuffle can be adjusted to add some extra groove to your productions and for more original bass lines it is also possible to adjust gate length and slide time. Cyclone Analogic also added MUTE and HAMMER features, which can be accessed in recording mode as well as in real-time. The former is designed to imitate the effect of a palm mute with a bass for shorter, less bright steps while the latter simulates a hammer-on or hammer-off action.

Other new features include the Loop Edit and Pattern lab, which is unique modes for creating and editing patterns. Using Loop Edit it is possible to create or edit a pattern while the sequencer is running while Pattern Lab offers extended control over the pattern generator. With it, you can create patterns for your particular style to match the modifiers you used or even your musical key. Finally, it has a unique ARP mode and advanced editing features.

In terms of technical specifications, the TT-303 V2 has one VCO, two waveforms, widely improved audio specifications, and noise floor compared to the original and added outputs. These include CV, GATE, ACCENT, DYN SYNC, Run - Stop, and VCO Out. Even with the large about of Roland TB-303 clones on the market, the TT-303 V2 stood out as a great alternative at a much more affordable price. 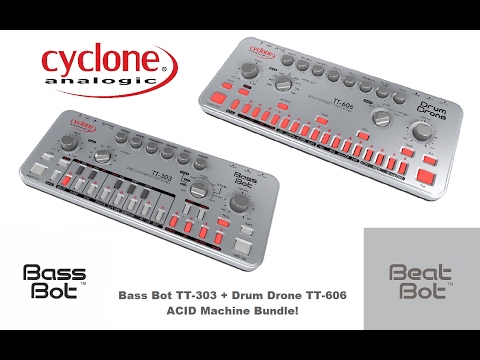