The Bass Station is an incredible little synth that was an instant success when released. It is a monophonic analog bass synthesizer and was basically one of the first new analog synths to hit the music market since the 1980's. It is great at recreating classic TB-303 lines and fat Moog tones. Every control from typical analog synths can be found on this: ADSR, filter, oscillator sync modes, tuning, and LFO! And most of these can be MIDI controlled.

The Bass Station has dual-DCO's which are true analog oscillators, digitally synchronized, to generate analog but stable sawtooth and pulse waveforms (the same waveforms offered by the TB-303). They can each be tuned, mixed and synced together. The analog filter is a switchable 12 or 24dB/oct with cutoff, resonance, envelope amount, and assignable ADSR. The LFO has variable speed and delay with random, triangle or sawtooth shapes. The LFO can modulate the filter and/or PWM.

A very useful feature includes the built in MIDI/CV converter which allows you to control the Bass Station from an older analog synth, or you can control analog synths with MIDI through the Bass Station! All knob settings are MIDI transmit/receivable and there are 60 user patches for program storage. Another important feature is the analog input for filtering external sound sources! The Bass Station Keyboard was the original version but is a bit more limited than this classic. It is used by William Ørbit, Biosphere, Massive Attack, Orbital, Apollo 440, Nine Inch Nails, Radiohead, Jimi Tenor, Laurent Garnier, ATB, Sneaker Pimps, Out of Logic and Underworld. 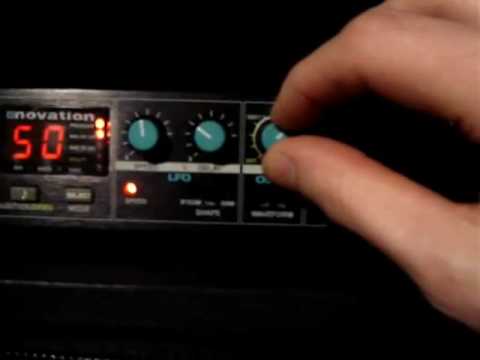 Novation Bass Station
by
xigronaus
ManualRead or download the complete and original owner's manual for the Bass Station Rack (in PDF format).

Polyphony - Monophonic
Oscillators - 2 DCO's, each with Pulse and Sawtooth waveforms. Can be modulated by ENV2, LFO. PWM source modulated by ENV2, manually, or by an internal LFO.
LFO - LFO with random, triangle, and sawtooth waveforms
Filter - 12dB / 24dB switchable resonant low-pass filter can be modulated by ENV2 and LFO (ENV1 is for the VCA, ENV2 is for the filter), cutoff, resonance, env mod.
VCA - 2 ADSR envelopes with velocity depth and auto-glide, single- or multi-triggering
Keyboard - None
Memory - 40 presets, 60 user program
Control - MIDI and CV/GATE in/out
Date Produced - 1995