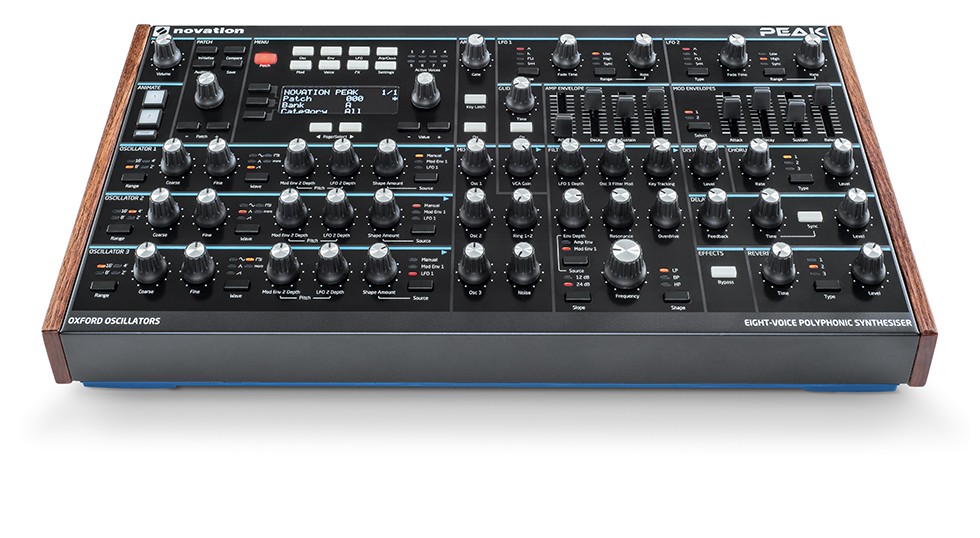 Announced at SuperBooth 2017, Peak is Novation's new 8-voice polysynth packed with a surprising set of features that make it a versatile addition to any synthesizer arsenal.

Peak was designed by Chris Huggett, probably best known for designing the classic EDP Wasp and OSCar synthesizers, and also responsible for Akai's rackmount samplers from the S1000 through the S3200, and Novation's synthesizers starting with assisting on the classic Bass Station and starting full time at Novation with the original Supernova.

For the Peak, Huggett went back to his roots and designed a digital/analog hybrid synth with digital oscillators and effects, and an analog filter. Most of the editing features are easily accessible on the front panel, making it quick and easy to program. Deep editing isn't too difficult either, as the menu pages are laid out for quick access and once you've learned the system even the deepest menu options are only a few taps away. The controls on the Peak use 8-bit resolution as opposed to the 7-bit resolution of MIDI CCs. As a result, filter sweeps and other controller movements come out much smoother. Of course, the data is converted down to normal 7-bit MIDI for output.

The real revolution in the Peak's design is how its oscillators work- the Peak's New Oxford Oscillators, a reference to where Huggett resides as well as bringing to mind the OSCar. Instead of using sample-based oscillators like many of the 80s hybrids did, or DSP-based oscillators like more recent hybrids, Peak uses FPGA-based oscillators running at 24 MHz to circumvent the usual sample rate limitations of sample and DSP oscillator designs. Analog-style waveforms are generated using a technique they call Numerically Controlled Oscillators where the FPGA works like an analog circuit but with precise control- pitch instability on the Peak is only when and how much you want it to be. The saw wave can be multiplied and detuned on the FPGA to create a triple saw with no impact on the synthesizer's polyphony.

The other waveform generation technique is using wavetables. The Peak has 17 wavetables of five waveforms each and blends these waveforms to create smooth transitions. Unlike older wavetable synths, the Peak's wavetables are not band-limited, so are more harmonically rich and yet not as prone to aliasing as most other wavetable-based synthesizers.

The Peak's filter is a multimode self-resonant analog filter based off of the filter in the Bass Station II. It is a state-variable OTA filter that has both 12 and 24 dB slopes and can function in low-pass, band-pass and high-pass modes. Each filter also has its own pre-filter and post-filter analog distortion that ranges from a mild thickening of the filter's output to some serious analog distortion- and that is before you apply the analog distortion on the Peak's master outs. The VCAs on the Peak are analog as well and can be optionally gained up to overdrive the output.

Peak has three digital effects at the end of its signal chain- reverb, delay and chorus- in addition to the aforementioned analog distortion. These digital effects are run on the FPGA at a sample rate of >90 KHz giving a very high quality I/O to these, or can be bypassed completely thus avoiding this ADC/DAC step.

A 16-slot modulation matrix gives you deeper modulation possibilities than the default routings, with two sources and one destination available per slot.

The synth is rounded out by USB MIDI and DIN MIDI in/out/thru, stereo out, a headphone jack, two pedal inputs, and a 1/8” CV in for accepting modulation from modular sources. Also included is a cloud-based patch librarian.

The Novation Peak is a flexible, accessible polysynth capable of producing everything from smooth pads to highly distorted industrial sounds and everything in between, and is quite capable of filling many roles in anyone's synthesizer setup. 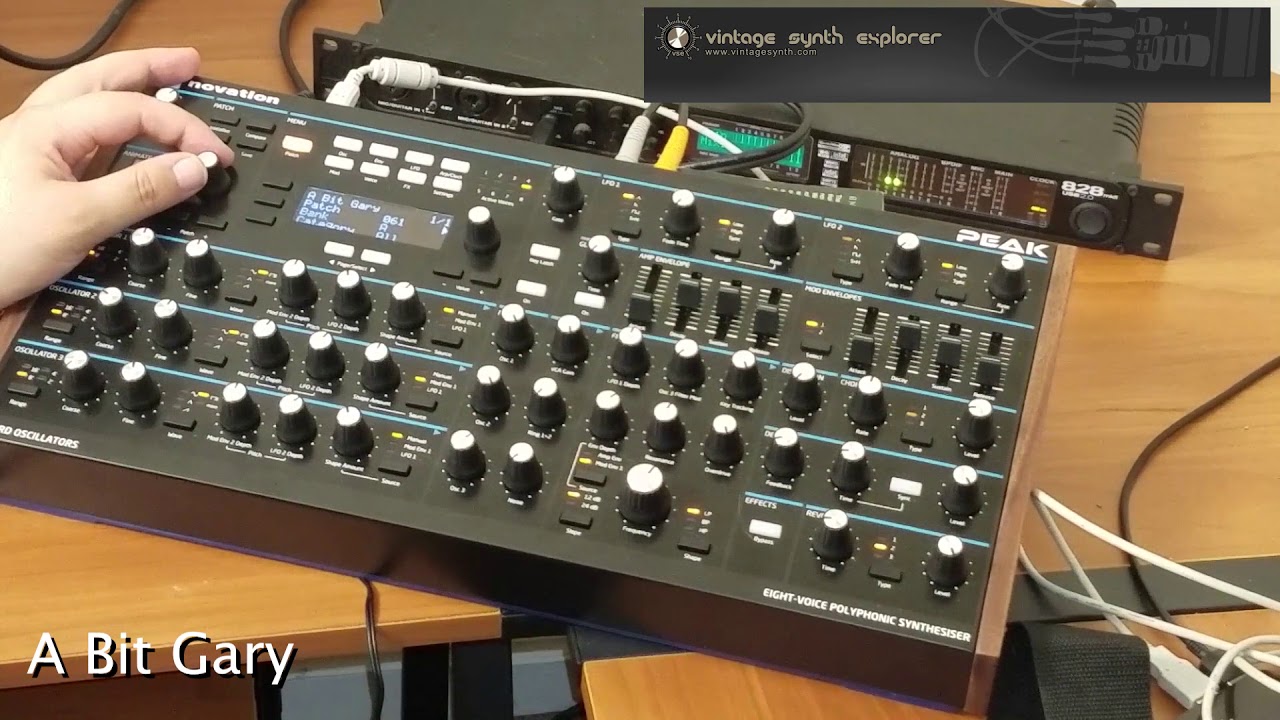 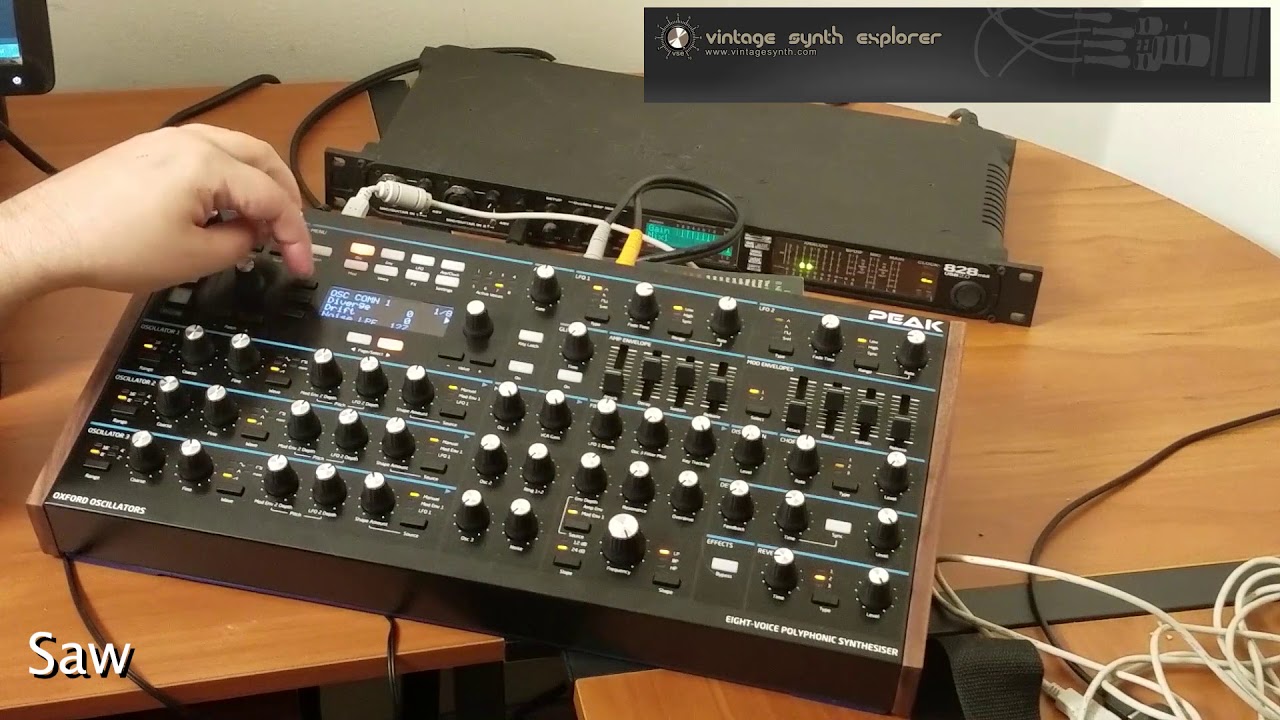