The RS-202 is a string and brass synthesizer released in 1976 that followed the lackluster RS-101. Oddly the RS-202 wasn't much different than its 101 predecessor. The RS-202 had two new features: a user-controlled delay for the vibrato, and an Ensemble/Chorus effect (that would be seen on dozens of future Roland analog synths for years, including the Junos and Jupiters). It makes the ultimate "disco" string sound.

The RS-202 is fully polyphonic (all 61 keys can play simultaneously). Basically three sound presets are in the RS-202: Strings I, Strings II and Brass. Forget the brass, however, because this machine is all about the strings, and for a time it was considered Roland's finest string machine. Strings I covers low cello & bass type sounds and Strings II is thinner and in the higher registers for Viola and Violin type sounds.

The keyboard is permanently split into two separate sections, the lower 2 octaves and the upper 3 octaves. Each section has it's own set of identical controls. These include three white On/Off buttons for each of the three sound presets. This means you can assign any sound to each section, and any combination; For example, set the lower section to Strings II and set the upper section to Strings I+II+Brass if you like. There are also two grey buttons in each section for "Slow Attack" and "Volume Soft". Each section also has its own sustain slider and there are global brilliance sliders for the brass and string sections independently.

Basic effects included the Ensemble (chorus) effect and Vibrato. A switching-slider is used to select Ensemble I, Ensemble II or Off. The Vibrato effect section had just two sliders: Delay and Speed (depth could not be changed). The Ensemble section did wonders for the sound of this machine; the 'Ensemble II' setting introduced a rich chorus, whereas the 'Ensemble I' produced the faster, deeper ensemble effect that became an instant classic. Sadly, like most vintage synthesizers the RS-202 is mono (high/low output jacks on back) and provides only a trigger output for an external synthesizer. It's built-in to a suit-case style housing which made it easily portable.

The RS-202 is a truly vintage and classic machine. Historically, it launched Roland's signature Ensemble effect. It also sounded fantastic - with or without the ensemble effect engaged. It easily stood up against many competing synths of its time such as the Arp Solina. It's been used by Tony Banks, Rod Argent, Tomita, Nick Magnus, Jethro Tull, Camel, and Magnum.

A sort of trivia regarding the RS-202: It was virtually cloned by an small American company called Multivox. they released the MX-202 which not only looked almost totally identical to the RS-202, but also featured copied hardware - component for component! Despite only a few minor differences between the two, the MX-202 still didn't sound as nice as the Roland. 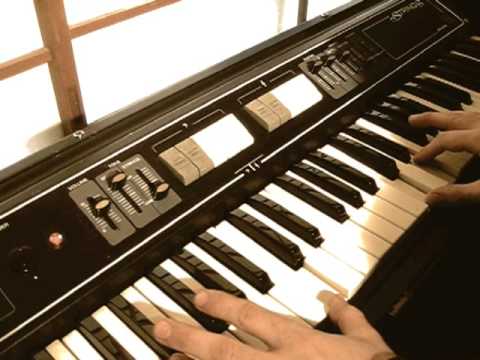 Images from Sound on Sound