The Yamaha A3000 is a professional hardware sampler released by the company in 1997. Back then the company was exactly known for sampling, so the release of the A3000 was an unexpected one. The goal of Yamaha with the A3000 was to make a break-beat machine and phrase sampler that could be used for a wide variety of recording as well as performance applications.

Although the A3000 is a capable machine, it is one that takes a lot of time and dedication to master. Right out of the box you are faced with an almost 400 page manual to introduce you to all the features and functions of the A3000. Although the A3000 only shipped with 2 megabytes of memory, it can accept expansion memory in the form of single in-line memory modules up to a maximum of 128MB. Seeing as 2 megabytes is barely enough for ten seconds of stereo sound, the ability to add more memory is a useful one. The A3000 can also accept another expansion in the form of an AIEB1 board. Without this board, this machine only supports analog I/O, despite storing all internal data in digital form. For direct digital I/O connectors the AIEB1 board is required as it features optical connectors and coaxial connectors along with three stereo assignable output pairs.

New in the box, the A3000 included a power cord, MIDI cable, five floppy disks, owner's manual, power supply cable, SCSI cable as well as CD-ROM filled with samples. The A3000 handles sample processing with three independent effects blocks that can handle all the usual delay, reverb and chorus style effects. In addition, it can handle sample specific effects as well. Another thing that sets the A3000 apart at the time was that its effects could be accessed and applied in real time to any of its audio inputs, which means it made for a perfectly good stand alone effects processor.

The 64 note polyphonic A3000 features a 4 band EQ system as well as parametric EQ. With five multi functional knobs on the front panel, it allows you to perform fast editing with real time control. Amongst the downsides of the A3000 is the small LED display that can only display two lines and an operating system that could be described as cumbersome at best. A big issue for a lot of A3000 users is trimming, which is incredibly difficult due to the small display. 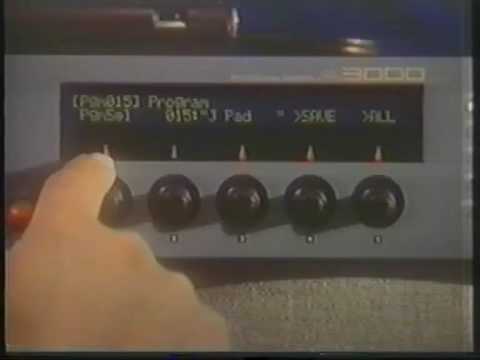